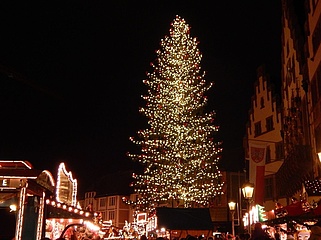 Stand operators of the Frankfurt Christmas Market pack parcels for the homeless / Citizens are also called upon to donate in kind / Festive family Hausmann as co-initiator of the campaign accepts parcels / Official handover of gifts on the Christmas market stage on 16 December 2016, 6 pm

Christmas also thrives on making other people happy and giving them presents. For the members of the Frankfurt Showmen's Association, it has been a matter of honour for years to put this Christmas spirit into practice for people in need: For the 25th year in a row, they are collecting Christmas presents for the homeless at the Frankfurt Christmas Market together with the Brotherhood of Capuchins in the Liebfrauenkloster. "This anniversary makes me particularly happy, because it means that this beautiful tradition has been a matter of the heart for everyone involved for a

quarter of a century," says Eddy Hausmann, co-initiator of the campaign. Not only the showmen collect gifts, also citizens of the city are cordially invited to tie packages and to deliver them on the Christmas market stage or at the stand of the festival family Hausmann on the Römerberg.

On Friday, December 16, at 6 p.m., the showmen will then hand over the collected gifts on the Christmas market stage to Brother Paulus Terwitte of the Franziskustreff and to the deputy head of the city council, Erika Pfreundschuh, who is the patron of the donation initiative.

"We collect for people who are on the sidelines and have no roof over their heads. In doing so, we are setting a sign of respect and togetherness," says Hausmann. The success proves the initiators right: last year, a complete truckload of gifts was handed over - a record. "It would be nice if we could break that record this year," Hausmann notes.

Most needed are warm clothes like socks or scarves. But hygiene articles or food are also welcome. On Christmas Eve, the helpers of the Franziskustreff will distribute all donations to the needy