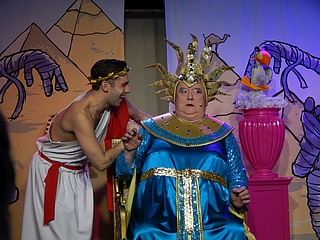 After "Sissi", the next Walter Bockmayer play comes to Theatrallalla

It can certainly be considered an experiment what Thomas Bäppler-Wolf brought to the stage of his Theatrallalla Theatre last summer. His adaptation of the shrill Walter Bockmayer comedy "Sissi - Beuteljahre einer Kaiserin" was even more colorful, quirky, politically incorrect and deliberately trashy than what is usually offered here. To the delight of all involved, the play was well received by the audience, so that not only was a second guest performance of Sissi added to the program, but the new adaptation of another Bockmayer play was soon underway. This time Bäppi took on "Cleopatra and the Curse of the Temple Whores".

As with "Sissi", there is only a very rudimentary plot to "Cleopatra", in which Cleopatra has to flee Egypt and ends up on the Geissens' yacht, where she is rescued from enslavement by RTL by Leni Riefenstahl, only to be in front of the camera in a big propaganda film for the Führer at Babelsberg. You guys are confused? Don't worry, it's meant to be. The fact that Heino and Marlene Dietrich also show up, the audience gets a crash course in galley rowing and very dazzling costumes are used makes the turbulent chaos perfect!

Yes, "Cleopatra and the Curse of the Temple Whores" is truly not high culture. But that's not what Bäppi and his good-humoured comrades-in-arms Stefan Pescheck, Pierre "I didn't really want to take part in this play" Humphrey and Thomas Koob want to deliver. This time, too, they are primarily interested in slipping into the most diverse roles and thus giving their audience two fun-filled hours with lots of hearty laughter. And they succeeded very well at the premiere on Wednesday. Especially when the one or other text hanger is commented on in an amusing way or when the actors themselves can't really suppress a laugh, it becomes clear how much fun they have in bringing this "politically incorrect tour de comedy" to the stage. And this joy of playing also transfers to the audience - then it doesn't matter at all that no sophisticated culture is offered here.

Who anyway belongs to the Theatrallalla regular audience or simply has fun with unrestrained silly trash with vocal interludes from Schlager, chanson and musical, who simply wants to get served a large portion of good humor or already had great fun with "Sissi", should quickly secure a ticket for "Cleopatra"!