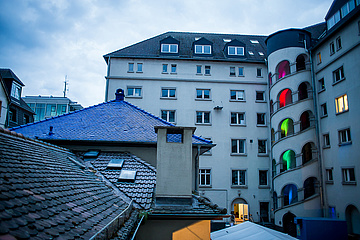 (ffm) At its meeting on Friday, May 18, the City of Frankfurt's municipal council approved the lease of the Schwedlerstrasse property and the sublease to the Atelierfrankfurt association for another ten years and forwarded it to the city council for deliberation and resolution. This means that a long-term solution has been found for the Atelierfrankfurt, which will ensure that it remains in the east of Frankfurt.

"I am very pleased that, after intensive negotiations, we have succeeded in retaining this cultural centre for Frankfurt and its artists. This house offers creative people the opportunity to rent rooms at reasonable prices in a city that is becoming more and more expensive and thus prevents migration to other cities. The Atelierfrankfurt contributes significantly to the cultural landscape of our city, both internally and externally", says head of culture Ina Hartwig.

"It is gratifying that with the sale to ForteCap, a result could now be achieved that is satisfactory for the Atelierfrankfurt and the many artists, for the seller Mr. Loulakis, the buyer and also for us as a city," judges head of building Jan Schneider. "At this point, the city would not have done itself any favors by acquiring the property itself, as it does not fit into the city's portfolio and would therefore not be managed in a goal-oriented manner."

The lease of Germany's largest artist-run space in the city's east end expires after five years on June 30, 2018. The building on Schwedlerstrasse is currently home to around 130 studios, where 220 artists and creative professionals work, including 28 subsidized studios from the city of Frankfurt am Main. The continued existence of affordable studio and work spaces is a concern of the City of Frankfurt and Atelierfrankfurt.

The current owner of the building, Michael Loulakis, expressed his intention to sell the property some time ago. Since then, negotiations have been ongoing regarding the possible retention of the Atelierfrankfurt association in the building on Schwedlerstrasse. "After the planned conclusion of the purchase agreement, I am pleased that the Atelierfrankfurt has found a professional and art-savvy landlord for the next ten years in ForteCap," said Michael Loulakis.

Forte Capital Deutschland GmbH, a Frankfurt-based real estate investor represented by Managing Director Roland Schmidt, will acquire the building at Schwedlerstrasse 1 to 5 from Michael Loulakis in the coming weeks. Forte has already been successfully involved in the field of art and culture in Vienna in the past. This will ensure the continued existence of Atelierfrankfurt and its 220 creatives in the form of a ten-year lease.

"We are overjoyed that we can continue our unique project in Schwedlerstraße - and expand it with exciting new projects. A planning security of ten years is a gift for an off-space like Atelierfrankfurt. I am happy for the 220 artists and creative people in the house, who can now dedicate themselves to their projects and no longer have to worry about a roof over their heads", say Jörg Mugrauer and Corinna Bimboese from Atelierfrankfurt.

The current rental prices for a studio in the building are well below market value and have also been stable in recent years. From the funds of the city's studio program, the Department of Culture provides 357,000 euros annually to support the association