Silent Mail at the Museum of Communication
from FFM Aktuell 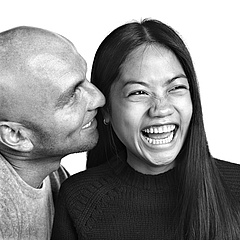 Whether at children's birthday parties or as a party gag - Silent Mail is something that all of us have played at one time or another. It's always amusing how something whispered in someone's ear is understood and then passed on, so that quite often something completely different comes out in the end. The Museum of Communication is now hosting a Forum exhibition that takes a somewhat different look at the concept of the game. It's about the transmission of messages, about understanding and misunderstanding. The photographer Herlinde Koelbl has now detached the whole thing from its verbal component and raised it to a purely non-verbal level.

She has brought together people of different origins, ages, genders and from different walks of life. Each of these people was once the whisperer and once the receiver of a whispered message. Koelbl has captured what then emerged between two complete strangers in large-format black-and-white photographs, which can be seen at the Museum für Kommunikation until 2 April. The exhibition is designed so that the hanging of the images suggests that only a whispered message was passed from the first whisperer to the last recipient. But this was not the case when the photographs were taken. Herlinde Koelbl left it entirely up to the women, men, and children from a total of 16 different nations to decide what they wanted to whisper into the ears of their counterparts. This was to remain their secret. For the photographer was primarily interested in capturing a very special moment of rapprochement.

A moment in which the fear of "the stranger" falls away and in which a closeness suddenly arises that expresses itself differently for everyone. In the looks, but also in the body language of the photographed people, many different facets of emotional reaction are recognizable: skepticism, concentration, curiosity or pure joy. It is also interesting to see how the faces change when the "whispered" becomes the "whispered". Thus, in the end, a very exciting photo project has been created, which shows how multi-layered communication between people is and that it is worthwhile to "lend an ear" even to strangers.

Parallel to the exhibition, a small gift booklet has also been published, in which all the pictures appeared with accompanying texts by Michael Krüger, some of them amusing, but also curious, which is available in the museum shop. You can find all further info HERE