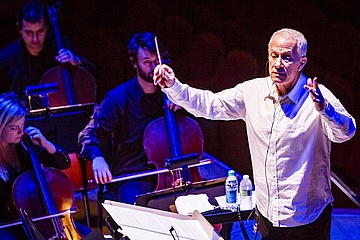 On December 01, the great film composer James Newton Howard will be on stage in Frankfurt's Jahrhunderthalle with a choir and large orchestra to present the highlights of his work to date live. This is guaranteed to be a very special evening - for all visitors, but for one in particular. Because as we had reported to you HERE, James Newton Howard was looking for a singer for his concert, who may sing the number 1 hit "The Hanging Tree" from "The Tribute of Panem - Mockingjay Part 1" in the Jahrhunderthalle.

Now it is fixed: the singer who will perform together with James Newton Howard on stage in Frankfurt. Hanne Kah from Mainz prevailed among numerous applicants and will sing the solo "The Hanging Tree" at the tour finale on 01 December 2017 in the Jahrhunderthalle.

You can already look forward to a real goosebump moment on this evening. Especially for Hanne Kah, after all, James Newton Howard is one of the most successful and well-known film music composers in the world. Part of his first live concert tour zus ein, is certainly a great honor. In addition to "The Hanging Tree", the Grammy and Emmy award winner will present many other highlights from three decades of film music from high-profile Hollywood productions.

He has become known for his music to the films Pretty Woman, Lord of the Tides, The Sixth Sense and King Kong. His most recent success is the music for The Tribute to Panem including the song "The Hanging Tree", sung by Jennifer Lawrence, which made it to #2 on the Billboard Hot 100 US chart as well as the top spots on numerous hit lists worldwide.