Sissy I is Frankfurt's new cider queen
from FFM Aktuell 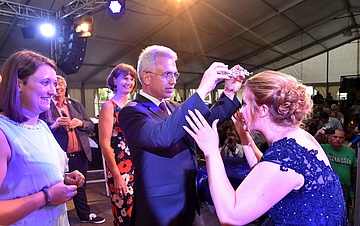 In Frankfurt, as is well known, there is a lot of change, always something new - but also a lot of tradition that people like to hold on to. This is also made clear by the Berger Markt in the Bergen-Enkheim district. This traditional folk festival has now been celebrated for 300 years. For Lord Mayor Peter Feldmann, it was a matter of course to personally open the beautiful festival again in 2019. And he uses this traditional occasion to crown the new cider queen in a fitting ambience.

For it is a good tradition that the Lord Mayor moves with a prankster and pages to the coronation site and there - accompanied by music - first opens the Berger Market. After the reigning queen, Trina I, has been bidden farewell with flowers and a necklace as a gift by the head of the town, two pageboys accompany her successor onto the stage. It is Sissy I, a queen with a sonorous name, reminiscent of another "Sissy", revered by many, from Bavarian noble circles.

Following the tradition further, the cider glasses are then filled and Mayor Feldmann then hands the sash, crown and certificate to the new highness. From her predecessor, Trina I, she finally receives the scepter. "The Berger Markt is a symbol for Frankfurt. Almost everything can be united here: old customs, modern ideas, local ties and openness," said Feldmann in praise of the festival. The Berger Markt brings people of all ages and backgrounds together. In this way, it strengthens cohesion and community, which is particularly important in today's world. "This makes the Berger Markt a true people's festival," said the Lord Mayor.

District Mayor Renate Müller-Friese said at the opening: "The Berger Markt is a central part of our district culture. Young and old come together here - it's a festival for everyone, with a centuries-old tradition."

Feldmann thanked the outgoing cider queen Trina I for her services as an ambassador for Frankfurt and its tradition-rich district. He also thanked the cultural society and the tourist office for organizing the market.