Small sensation at Frankfurt Zoo: offspring of the pinnipeds
from FFM Aktuell 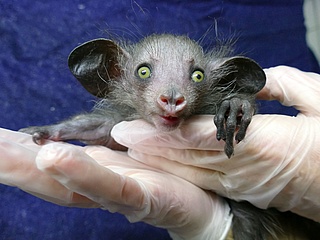 Frankfurt Zoo is particularly pleased about this offspring: on October 26, a fingered animal was born in the Grzimek House. As these animals are a highly endangered primate species, every new baby is particularly valuable for their conservation. Also called aye-ayes, they look like mythical creatures with their striking eyes, bushy tail and thin middle finger with a long claw, which serves as a tool for foraging. Frankfurt Zoo is particularly pleased about the rare offspring: "A fingered animal birth is always a sensation," says Dr. Ina Hartwig, Head of the Department of Culture and Science, "the nocturnal animals are rarely kept in zoos. We Frankfurters can be proud of our nocturnal animal house, because in 2010 an aye-aye was born here for the first time ever in Germany."

The proud mother is KINTANA, who was born in Bristol Zoo in England in 2005 and has lived in Frankfurt since 2007. Kitana is an experienced mother: "Aye-ayes have a decidedly low reproductive rate. After a gestation period of just over five months, a female aye-aye only ever gives birth to one cub. Their birth intervals are two years. It is therefore all the more important that the offspring develop well. To check this, the young animal is weighed regularly. That's how we know it's a male," explains zoo curator Dr. Johannes Köhler.

Frankfurt Zoo currently has four pinnipeds: KINTANA and her youngest offspring, her son KIMALA, born in 2011, and VINNY, also born in 2011 at the San Francisco Zoological Gardens. KINTANA's cub is still staying in its nursery, the litter box, and it will be a while before it begins to explore the facility.

Fingered animals are members of the lemur family. The species is found exclusively in Madagascar and is considered "critically endangered" due to habitat loss, according to the Red List. However, massive forest destruction as well as extreme drought in the south of the island threaten not only the aye-ayes, but Madagascar's unique biodiversity as a whole, and thus the livelihoods of its inhabitants.