Smooth deconstruction of the Schwedler Bridge
from FFM Aktuell 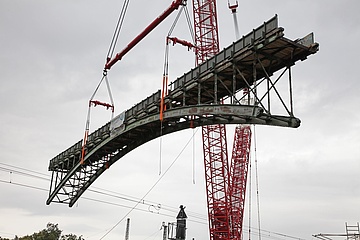 (kus) The deconstruction of the Schwedler Bridge went smoothly and was completed ahead of schedule. It started in the night from Sunday to Monday, October 2 to 3. Shortly after midnight, the first bridge span was excavated with a 600-ton crawler crane. Lord Mayor Peter Feldmann was on site until 1:30 in the morning and followed the construction work with interest. "Today's deconstruction marks the beginning of the rehabilitation of this important pedestrian link in Frankfurt's east. I hope that this important industrial cultural monument can be preserved as planned," Feldmann said.

Then, at 11:30 a.m. on Monday, October 3, the northernmost historic bridge arch was excavated. All of the bridge spans that ran over the German Railroad tracks have now been removed. "Now the historic structure will be examined. Only after a thorough examination can it be decided what can be renovated and what needs to be replaced," Feldmann explained.

The pedestrian footbridge, which connects Ostpark in the north with Ferdinand-Happ-Strasse in the south, has been a listed building since 2010, and has been closed since 2011 due to dilapidation. In order to protect the railway service running underneath from falling parts, the dismantling of the Schwedler Bridge was urgently necessary. For safety reasons, all tracks under the bridge were closed during the construction work and trains were diverted.

Despite the rainy weather, many spectators gathered in a specially designated area both at night and during the day to watch the construction work. Michaela Kraft, head of the responsible office for road construction and development, is pleased about this: "It is important to me that we explain what and why we are doing something at our construction sites. If there are then such spectacular pictures to see as here, the construction site becomes an event for the population", says Kraft.
&emsp;
The plans for the redevelopment envisage retaining the four historic bridge arches and integrating a replacement new construction for the newer bridge spans from the 1950s. The design is by the consortium Christoph Mäckler Architekten and Bollinger und Grohmann Ingenieure. It is expected that the Schwedler Bridge will be passable for pedestrians again in 2020/2021