World Cup 2018: In the jersey jacket on the fan mile or in the stadium
from FFM Aktuell 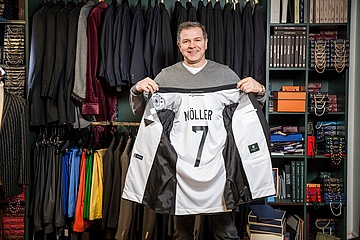 Andreas Möller not only shows flag

Now it is only a few days until the first appearance of the German national football team at the World Cup in Russia. With flags, caps or black-red-gold make-up, fans have already equipped themselves to support our team on the fan miles at the public viewing or in their own living rooms.

Ex-football world champion Andreas Möller is one of the most successful German footballers, has won many titles himself and is now a DFB representative. He had something special sewn into his jacket as an inner lining to support Joachim Löw's team. The current World Cup jersey of the national football team with his name and his former shirt number seven. Not only does it make him look smart, but it also allows him to show his affection for the DFB team.

Stephan Görner, tailor from Frankfurt and Sven Müller are the initiators of the jersey jacket and have already equipped many fans or celebrities, such as Jürgen Klopp with the fan jacket. According to the motto outside fine, inside my club, all club jerseys of all sports can be sewn into a jacket as an inner lining.

The jackets and blazers are available in different colors and cuts. The "Three Friends", "Classico", and "Champion" styles feature sustainable craftsmanship, fine wool fabrics, and the finest cloth. The cost of the jersey jackets ranges from 299 to 449 euros. The order can be placed via the Internet at www.trikot-jackett.de