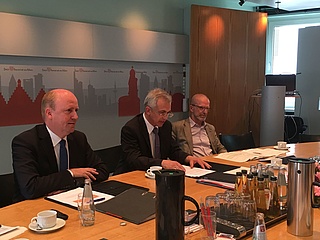 (ffm) After joint efforts and determined negotiations, the magistrate has agreed on viable results. The city of Frankfurt am Main is planning a loss of 183.8 million euros for the year, but the reserves are still sufficient.

"We are investing in the cohesion of the growing city. I thank the magistrate for the good cooperation. Specifically, the draft budget shows that the areas of education and social affairs have the highest expenditure position in the results budget. In the investment programme, over 150 million euros have been set aside in the education sector for the new construction and renovation of schools and day-care centres. Another focus is on securing and creating affordable housing. Major infrastructure projects, such as the expansion of the subway into the Europaviertel and the expansion of Klinikum Höchst, among others, are also part of the investment program in the 2019 budget, as are the expansion of bicycle traffic, the expansion of barrier-free public transportation and the Historical Museum," said Mayor Peter Feldmann.

"The draft budget for 2019 takes into account the difficult financial situation, which has arisen on the one hand due to the growing city and on the other hand due to lower funding from the state of Hesse," said Mayor and City Treasurer Uwe Becker. "We manage solidly and also take into account our responsibility for future generations in terms of financial policy. At around 184 million euros, the deficit for 2019 is once again 30 million better than planned with the recently adopted budget for 2018. In order to further secure the performance of our city, investments for the benefit of the citizens of our city are important and necessary on the one hand. Nevertheless, on the other hand, we must maintain future viability. Here we are all called upon to keep the planned deficits as low as possible. In the following years, too, we will stay on the path of consolidation we have taken."

In terms of personnel policy, the City of Frankfurt am Main is continuing on its course in the coming budget year. The staffing plan provides for a moderate increase of 210 new positions in order to be able to cope with the increasing challenges of the growing city in the administration.

"In view of the demographic change, which will lead to more than 25 percent and thus more than 3,000 municipal employees retiring within the next 10 years, the strengthening of our training activities with the creation of 24 positions is a focal point in the job plan. Another criterion is the generation of additional revenue to help cover personnel costs. Here, 45 new jobs are planned. With 88 post creations, we are transferring posts that have already been filled into the regular establishment plan. So this is where we are cleaning up."

"Majer is particularly pleased" that the magistrate has agreed to reduce the personal contribution of municipal employees to the job ticket from 45 percent to 20 percent: "This is not only good for our employees and the environment, but also another building block to increase our attractiveness as an employer."

Stable tax revenues form the basis for the budget. Revenues of 3.9 billion euros are planned for 2019. The most important source of revenue continues to be the trade tax. After €1.7 billion in trade tax revenue was already generated in 2017 and a stable economy is still expected for Frankfurt, €1.9 billion in revenue has been budgeted for in the 2019 budget. The income is offset by expenses of €4.1 billion. According to current planning, deficits are also expected in the coming years.

"In order to secure our city's ability to act, but also Frankfurt's attractiveness, investments in education, culture, security and mobility are right and important. Only if we continue to fulfil our social responsibilities, i.e. ensure a balance between economic strength and social security for the people, will Frankfurt remain fit for the future," stresses Mayor and City Treasurer Uwe Becker. "This also includes responsible action by the state government. The city of Frankfurt, which is in international competition with other metropolises and is an economic engine for the whole of Hesse, can only withstand the additional burdens and challenges of the future and make its contribution to solidarity if the city's role is recognised and appreciated."