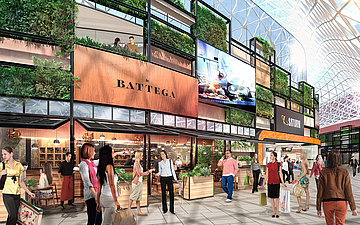 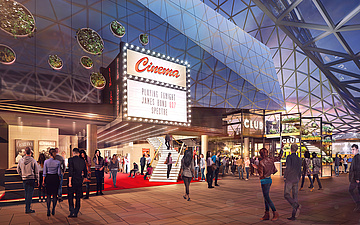 Many a visitor to the MyZeil shopping center will have wondered in recent weeks as they took the escalator to the 4th floor. All the catering establishments there have closed, there are barriers everywhere, the HalliGalli indoor playground has disappeared and access to the terrace is also blocked. Only the customer toilets, the fitness centre and Saturn are still accessible from here. The reason for this is that the plans, About which we had already reported to you in November 2016, are no longer a utopia but are now actually being put into practice. In keeping with the upcoming tenth anniversary of MyZeil in 2019, the upper floors of the shopping center will be completely remodeled over the next few months at a cost of around 70 million euros.

In spring/summer 2019, visitors will then be treated to "Foodtopia" here: 15 new Caf&eacute;s and restaurants, a premium cinema with five screens, new lounge zones, three new rooftop terraces, premium WC facilities and another escalator from the 4th floor to the 2nd floor will make the shopping experience at MyZeil even more attractive. The Saturn store will also be enlarged on the 3rd floor, the exterior façade will be rebuilt and the center's truly magnificent architecture will radiate more cozy warmth through greenery and wooden ceilings. Great plans, which are now being implemented at full speed. Before the remodeling work goes full steam ahead, it has now been announced what offers you can look forward to:

And there really are a few highlights. So far, about 80% of the restaurant space has been leased. The gastronomy group "Sander", which has primarily made a name for itself in the area of catering for hotels and service providers, will try out a new restaurant concept here, which will present classics of German cuisine in a modern and fresh way. There will be a large indoor area for this, as well as a terrace.

Also new in Frankfurt is the Finnish premium burger provider "Friends & Brgrs", which is already enjoying great success in Hamburg. With the first branch in southern Germany, guests are presented with a "fresh casual burger concept", where guests can see exactly how the ingredients for their burger are freshly prepared. Another newcomer in Frankfurt does not want to be revealed at this time. This much can be revealed: It is an internationally known, renowned brand from the UK with a focus on fresh Italian cuisine. As soon as there is more detailed information here, we will of course inform you about it.

Starbucks will also be breaking new ground in MyZeil. With the first "Starbucks Reserve" store, very special coffee specialties will be offered in a cozy coffee house atmosphere. You can also enjoy your morning coffee in combination with French delicacies in the new branch of La Maison du Pain. Here, in addition to the indoor area, there will also be a terrace where a touch of France is combined with a view of the skyline. Also opening early will be the newest branch of ALEX, who already operate a very successful offshoot in a shopping center in Skyline Plaza. There will also always be after work events and other happenings here, with a conservatory, terrace and the skyline view that comes with it.

But a few old friends are also returning, including Coa, French-fry friends and Dean&David. But Foodtopia is not only supposed to be about enjoyment, but also about entertainment. That's why there will be a central place stage, which will host live cooking and cooking classes, as well as events like football broadcasts. And then, of course, there's the return of the Astor Film Lounge. However, the premium cinema will not have just one, as was the case at the Zeil Galerie at the time, but five screens of different sizes.

"Shopping in a new dimension" with a completely new food and entertainment concept is what MyZeil promises for the result of the conversion. And given the plans presented, it can also be assumed that this promise will be fulfilled. Of course, the work will not go entirely unnoticed by customers. But apart from a four-to-six-week closure of the grand escalator, there won't be any really significant inconvenience, as most major work is always done when people aren't shopping anyway.

We will of course continue to keep you updated as soon as there is news about "Foodtopia". You can also find more info at: