Sommerbau - An open-air theatre for Frankfurt
from FFM Aktuell 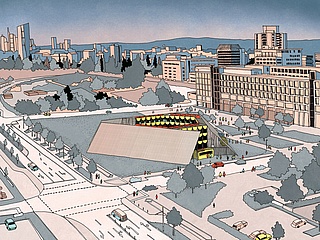 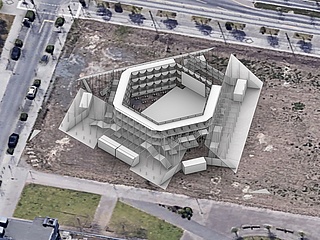 Just recently, the municipal stages announced that the play will remain closed until at least May 31. So it's likely that things won't really get going at the theatres until after the summer - if all goes well. And the popular open air theatre "Barock am Main" will also not take place in 2021. But the people of Frankfurt and Offenbach will not have to do without theatrical enjoyment altogether. The Künstlerhaus Mousonturm and Frankfurt LAB, together with the architecture collective Raumlabor Berlin, are planning to realise an open-air theatre that will be built in the Kaiserleiviertel by the summer and will offer pandemic-compliant theatre there until the autumn.

The open-air logentheater is to be very accessible, as it will be located near the Kaiserlei S-Bahn station and not far from the Mainuferweg. This makes it easy to get there by bike, on foot or by public transport from Frankfurt as well as from Offenbach. In addition, the square is also so well suited for this project because there are no direct residents here who might be bothered by the background noise created by theater performances or concerts.

In the "Summer Building" there should then be space for 200 - 300 visitors* - safely separated from one another in each case in boxes of two, spread over a total of four floors. This - in combination with strict hygiene measures and test concepts - should make culture possible again. The same applies to the events on the stage. This is to be implemented in such a way that dance, play and song are possible with a minimum of distance. Because, of course, not only the visitors, but also the artists and the staff behind the scenes should be offered a safe environment.

The temporary open-air theatre should not only be able to be used by the Mousonturm and Frankfurt LAB, but also by other partners of the independent scene and municipal institutions. In this way, a colorful variety of cultural creativity can be offered on a daily basis. After all, the "Sommerbau" should offer culture for everyone. If the plans can actually be realized, then we will at least get a piece of culture back in the summer. We'll keep you posted...