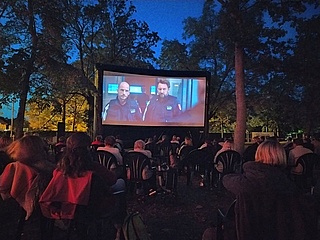 The cinemas in Hesse are slowly preparing for the reopening. But already there is finally cinema again - under the open sky. Because of the pandemic situation, the Hessian state government is backing a cultural open-air summer with the "Into the open air!" funding programme. The range of events supported is not limited to concerts or open-air theatres. The programme also provides financial support for open-air cinema. Thus, a very special cinema project can now be launched: Under the title "SommerWanderKino Hessen 2021", Hessian municipalities and other local organizers*, in cooperation with local cinemas and the Film- und Kinobüro Hessen e. V., are organizing numerous outdoor film screenings throughout the state. The focus is on small(er) locations, many of which are celebrating their open-air premiere. The prelude however takes place in Frankfurt.

When in the course of the next months approximately 500 times the open air cinema projectors are switched on, then not only humans in the entire federal state will come into the pleasure of the summer route, it is offered thereby also innovative formats: Instead of drive-in cinemas, for example, there will be bicycle cinema at three locations. It's especially nice that each event supports a Hessian cinema - a really welcome support for the movie theatres that have been closed for almost eight months. Mainly European productions will be shown, but arthouse gems from all over the world will also run across the screens. And with one or the other Hessian film, there will certainly be the opportunity to meet the filmmakers. In addition, Hessian short films in the supporting programme will whet the appetite for more and show what is going on cinematically in our state.

On 10. June marks the start of the SommerWanderKino Hessen 2021: the ada_hinterhof_kino of the Kinothek Asta Nielsen and the ada_kantine in cooperation with the Offenes Haus der Kulturen and the Kino Orfeos Erben will show the debut "Mein Vietnam" by Hessian filmmakers Hien Mai and Tim Ellrich in their presence. The next series of events as part of the SommerWanderKino Hessen 2021 will then begin on June 24 in the courtyard of Bad Soden's CasaBlanca Art House, as the cinema is now called, with a preview of "Rosa's Wedding". Together with its local partners, the Film- und Kinobüro Hessen is looking forward to a summer of diverse film screenings in numerous Hessian communities.

All events will be published on the SommerWanderKino website as soon as they are fixed and will be updated continuously. It goes without saying that all events will be held in compliance with the hygiene and distance rules currently in force.

All further info is available at: https://www.film-hessen.de/sommerwanderkino2021/