Sounds of Hope at Pentecost: Listening to the great city chime at home
from FFM Aktuell 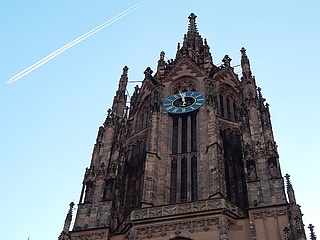 Easter already, many Frankfurters have experienced the beautiful tradition of the great city chime at home instead of at Paulsplatz or Römerberg. No comparison to the "original", but simply safer in times of Corona. Because even though the number of cases is declining and there have been numerous loosenings in recent weeks, the virus is still among us and can - if the rules of distance and hygiene are not observed - spread again at any time. The case of a service in a Baptist church in Frankfurt has just made this very clear. And that is why it is also advisable at Pentecost to avoid large gatherings of people and to listen to the city bells at home.

However, if you decide to listen to the sound of the bells on site, you should definitely observe the necessary distance regulations. Then nothing stands in the way of a common experience of this Pentecost tradition. Because especially this year, Whitsun has a very special meaning. Because Pentecost stands for understanding and the spreading of the faith across national, ethnic and language barriers. The sending of the Holy Spirit is celebrated on the ecclesiastical high feast, which is considered the birth of the Church. Pentecost should therefore be understood as an encouragement to actively stand up for fundamental values and convictions.

"Especially also at Pentecost the sounds of our unique city ringing are sounds of hope and mission for respectful cooperation at the same time. This is of additional importance especially in the current time of the Corona crisis, as hope builds the decisive bridge into the time after the current restrictions. Responsible interaction with one another promotes healthy and peaceful coexistence, just as a life according to Christian values does", says Mayor and Head of the Church Department Uwe Becker. "This also means that in these challenging times we must treat each other with respect and stand up for each other in solidarity. Only together will we be able to overcome the Corona crisis in Frankfurt. </The sending of the Holy Spirit on the Saturday before Pentecost in Frankfurt is also commemorated by a very special sound experience. On 30 May from 4.30 p.m. to 5 p.m. the bells of the ten inner-city churches will ring out to the great ringing of the city. As I said, it is possible to pause for half an hour and listen to the special sound art of Frankfurt's inner-city churches while observing the valid hygiene measures on site - or simply at home </p>

"Every year I, like many Frankfurters, look forward to this event. But those who would prefer to enjoy the great city sounds at home this year have the opportunity at http://frankfurt.de. I invite all Frankfurters to experience the urban tradition and the sense of community together online," says Becker. "Even if these are recordings, perhaps the great city sounds can still create a special sense of unity. On the city's Facebook page, the great city chime will be heard from 4.30 to 5 p.m., as is tradition, and we can all experience it together at home," emphasizes the church department head. The composition we have today goes back to the bell expert Prof. Paul Smets, who composed the chime in 1954. However, the first ringing of all Frankfurt bells dates back to 1347. The prelude is the Bürgerglocke of the Paulskirche. The other five bells of the Paulskirche follow. Then follow the four bells of St. Catherine's Church at the Hauptwache, followed by the five bells of the Liebfrauenkirche. North of the Liebfrauchenkirche the four bells of the Peterskirche and the three bells of the Dominican Monastery now ring out. With its six bells, the Leonhard Church on the Main and the four bells of the Camelite Monastery, which are also part of the great city chime, blend in. The four bells of the Alte Nikolaikirche on the Römerberg complete the composition before the Epiphany Church, located on the other side of the Main, begins the city's chanting with its five bells. The climax is followed by the nine bells of the imperial cathedral. Among them the Gloriosa, the most famous bell in Frankfurt. It is over two and a half metres high and wide and at 11,950 kilograms is the heavyweight among the bells of Frankfurt's inner city churches as well as the second heaviest bronze bell in Germany. In total, the 50 bells of the ten inner city churches together weigh 64,804 kilograms.