Citizens' consultation of a special kind
from FFM Aktuell 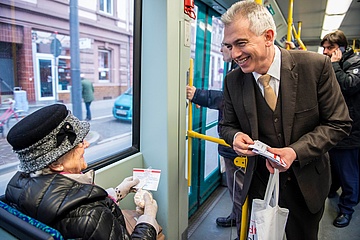 (kus) The passengers of line 18 were astonished: It was the Lord Mayor Peter Feldmann himself who quickly boarded the tram on Friday, 10 February. And already the scheduled ride of the citizens' meeting on rails started moving from Gravensteiner Platz in Preungesheim towards Sachsenhausen Lokalbahnhof. For Peter Feldmann, this was a welcome change from the conventional citizens' consultation hours in his office in the Römer.

During the ride, the head of the city distributed coffee and cake to the passengers and took time for the personal concerns of his fellow passengers. "It is the informal conversations with citizens that are particularly close to my heart. Here, as well as during my monthly house visits, I find out best where the shoe pinches the Frankfurt citizens and where politics and administration are asked to offer help", Feldmann explains the concept of the mobile office hour.

As the tram stopped according to schedule and passengers got on and off, new thematic aspects from the city districts passed through were found.

But it was not only suggestions and criticism that the Lord Mayor could take back to the Römer after the ride. "Rather, pride in our city predominated," Peter Feldmann was pleased to say.