Spring Dippemess 2021 Canceled - Is the "Dippemess in the City" Coming?
from FFM Aktuell 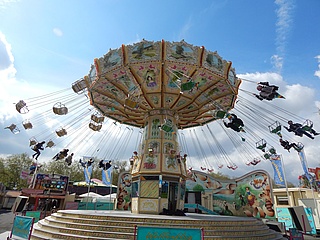 A year or so ago, we had expressed hope that the Dippemess anniversary, which was supposed to have been celebrated in the spring of 2020, could be made up in the fall or, at the latest, this spring. But the 675th birthday of our popular folk festival can unfortunately not be celebrated now. Because as Lord Mayor Peter Feldmann and Thomas Feda, Managing Director of the municipal Tourismus+Congress GmbH Frankfurt am Main (TCF), announced, the edition of the Dippemess originally planned for March 26 to April 18 will not take place either.

But the people of Frankfurt should not completely do without their Dippemess - at least if the Lord Mayor has his way. He explained: "I have asked TCF to consider a one-off special edition of the Dippemess in the summer - under the working title &sbquo;Dippemess in the City'." What would be special about this special Dippemess is that it would not be held at the fairgrounds on Ratsweg, but where its former home was: downtown. "The Dippemess kimmt haam," Feldmann said. "Until 1967, there were still rides on the Römerberg. Now, the Dippemess could help to keep the city center in the of the &sbquo;Frankfurt-Plan' I initiated. This brings us full circle. For originally it was a pure sales market. Our Zeil, with its many colourful shop windows, is in a way a modern development."

"A &sbquo;Dippemess in the City' would also be a fitting setting to catch up with the 675th anniversary of 2020," Feldmann explained. "A mixture of tradition and modernity, connected to Germany's most popular shopping street - in my view, that's exactly the signal we need for the departure after the harsh Corona winter."

Nevertheless, he said, the cancellation of the spring Dippemess was regrettable. "We delayed the decision as long as we could," Feldmann explained. "Our hope was that the infection figures would come down and a folk festival - albeit under special conditions and hygiene measures - could take place. But the course of the pandemic over the last few weeks and the necessary measures to contain it have dashed that hope."

And delaying the decision even longer would not have been possible for the showmen alone. For now. Almost two months before the planned start of the festival, binding orders would have to be placed for infrastructure measures such as power supply, sanitary facilities and other things on the fairground and the showmen would have to order goods as well as hire staff. Thus, a decision had to be made in order not to expose an industry that was already particularly affected by the pandemic to an additional financial risk.

"We regret the cancellation very much, but we also owe it to our showmen and women, partners and service providers to create planning security," explained Feda, whose Tourismus+Congress GmbH organizes the Dippemess every year.

The possibility that the Dippemess could be made up in a special form in the summer is certainly a small glimmer of hope. But if there's one thing the last few months have taught us, it's that the pandemic is completely unpredictable. Whether the situation has eased enough in the summer for a "Dippemess in the City" to take place is therefore nothing more than speculation at this point in time. But as they say so often, especially in these difficult times: hope dies last.