Stadtradeln 2019 - Cycling for a good climate
from FFM Aktuell 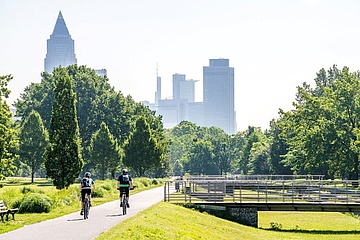 (ffm) This year, the city of Frankfurt am Main is once again participating in the international Climate Alliance campaign Stadtradeln. The aim is to leave the car at home and cycle as many kilometres as possible over a period of 21 days in order to avoid climate-damaging CO2. The campaign period for Frankfurt begins on 3 June, World Bicycle Day, and will last until 23 June. Anyone who lives, works, goes to school or studies in Frankfurt can take part.

Since 2008, citizens and local politicians have been pedalling for more climate protection and cycling. Interested cyclists can register at http://www.stadtradeln.de

Peter Dommermuth, head of the Environment Agency, says: "About a fifth of the climate-damaging carbon dioxide emissions in Germany are caused by motorised traffic. That's why the campaign is all about getting lots of people to switch to cycling in their everyday lives. That way, everyone can contribute to climate protection and do something for their own health." Last year, 51 tonnes of CO₂ were avoided during the city cycling.

Since cycling promotion and climate protection is a team affair, those cycling in the city cycling must join together in teams of at least two people. These can be, for example, people from a district, teams from companies, clubs or even individual school classes. The person who forms a new team is the team captain. This commitment is especially appreciated by the City of Frankfurt this year.

As part of Frankfurt Green City, the Environmental Office organizes the campaign for the City of Frankfurt am Main. More information is also available at http://www.frankfurt-greencity.de