STADTRADELN 2022: Cycling for a better climate
from FFM Aktuell 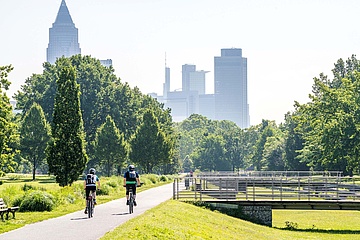 On 03 June 2022 is World Bike Day. The perfect starting signal for the annual, international Climate Alliance campaign STADTRADELN, which will then also begin in Frankfurt on this day. For 21 days, the participants will give up their cars and switch to bicycles, collecting as many kilometers as possible in the process. The saving of climate-damaging CO 2 that this achieves is the goal of the campaign, which is becoming increasingly popular. "Cycling is not only healthy, quiet and inexpensive, but also environmentally and climate friendly. Cycling is mobility without harmful air pollutants. Help out and ride your bike to work or shopping. Every cyclist more is a local answer to global climate change," promotes Climate and Environment Officer Rosemarie Heilig for participation in the World Bicycle Day. "The action offers a good opportunity to try out the constantly emerging cycle paths in our city and to explore the daily routes by bike in a new way," adds Stefan Majer, Head of Department for Mobility and Health.

The STADTRADELN 2022 starts on June 3 and ends on June 23. Anyone who enjoys cycling and who lives, works, goes to school or studies in Frankfurt can take part. Anyone interested can register at: www.stadtradeln.de.

Since bicycle promotion and climate protection are team matters, the cyclists join together in teams of at least two people on the STADTRADELN platform - for example from city districts, from companies, clubs or even from school classes. In addition to climate protection, STADTRADELN is all about having fun and experiencing happiness on two wheels for yourself. After the campaign, the City of Frankfurt will award prizes to the winners in various categories. This year, extra prizes for the special category "Families" will be raffled.

Also beyond the campaign period, STADTRADELN is intended to strengthen cycling in Frankfurt am Main. Since there is hardly any spatial traffic data available for cycling so far, data on cycling traffic will be collected via the STADTRADELN app during the three-week campaign and made available to all participating municipalities in Hesse. This information can support the planning and expansion of cycling infrastructure locally.

During the campaign period and beyond, the Cycling Office also operates the Cycling Reporting Platform. With this tool, all cyclists have the opportunity to draw attention to disturbing and dangerous places in the cycle path via the Internet. In addition, a specially developed campaign video for STADTRADELN in Frankfurt is intended to make all participants even more enthusiastic about cycling: It shows in a humorous way why the bicycle is clearly the better choice over the car. The video can be viewed at https://frankfurt-greencity.de/stadtradeln/.

According to a survey by the Federal Environment Agency, around 145 million tons of climate-damaging carbon dioxide emissions in Germany were caused by motorized traffic in 2020. 19 percent of these were caused by car traffic within towns and cities. If one-fifth of these routes were taken by bicycle instead of by car, around 5.5 million metric tons of CO 2 could be avoided. Last year, around 672,000 kilometers were cycled during the three weeks of STADTRADELN, avoiding 99 tons of CO 2 in Frankfurt am Main alone. As part of Frankfurt Green City, the Environmental Office organizes the campaign for the city of Frankfurt am Main.

Further information is available at https://frankfurt-greencity.de/stadtradeln/