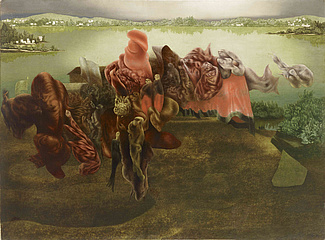 RICHARD OELZE, "ARCHAISCHES FRAGMENT" (1935) is a new addition to the Städel Collection.

The Städel Museum is pleased to announce a very special new addition to its collection. More precisely, for the area of Surrealism. This will be enriched with immediate effect by a major work by the German Surrealist Richard Oelze (1900-1980). With generous support from the Kulturstiftung der Länder and a grant from the Kurt und Marga Möllgaard-Stiftung, the Städelsche Museums-Verein and the Städel Museum were able to acquire Oelze's painting Archaisches Fragment (1935) from a private collection. The work, long thought lost, is one of only three large-scale works from Oelze's most important creative period in Paris - the other two works, Erwartung (1935-36) and Tägliche Drangsale (1934) are in the Museum of Modern Art in New York and the Kunstsammlung NRW in Düsseldorf. Following careful conservation and restoration measures, the Archaic Fragment can now be seen in a specially created cabinet presentation in the Städel Museum's Collection of Modern Art.

"Richard Oelze painted extremely few large formats in his lifetime. We are all the more delighted that - together with the Städelscher Museums-Verein and with the generous support of the Kulturstiftung der Länder - we have been able to seize the opportunity to acquire one of these major works of German Surrealism for our collection," says Städel Director Dr Philipp Demandt.

During his Paris years, Richard Oelze cultivated contacts with the main representatives of the Surrealist movement, including Andr&eacute; Breton, Max Ernst, Yves Tanguy and Salvador Dal&iacute;, whose ideas and design methods left clear traces in his work. The artists of this group were particularly interested in subjects that defied human logic. Dreams, visions, and the exploration of the subconscious were their central concerns. In Archaic Fragment, the fantastic motifs of the Surrealists mix with the precise painting style of the Neue Sachlichkeit, which Oelze had become acquainted with through his Dresden teachers Otto Dix and Richard Müller. Although painted in great detail, what is depicted defies final interpretation: against the backdrop of an unreal landscape hovers an animated-looking hybrid structure in which echoes of plants and animals merge with human bodily forms. The familiar and the strange meet and combine in surrealist logic to create a disquieting landscape of the interior. The artist also plays with erotic undertones, awakening fears and desires that lie dormant in the human psyche like an "archaic fragment".

"One of the core tasks of a living museum is the continuous expansion of its collection. I am all the more pleased that the Städelscher Museums-Verein, as the museum's oldest and largest patron, has once again been able to contribute to the further development of Frankfurt's collection at the highest level with the purchase of the Archaic Fragment," emphasizes Sylvia von Metzler, Chairwoman of the Städelscher Museums-Verein.

.The painting, exquisitely preserved in its original substance, underwent a careful restoration and conservation by Stephan Knobloch, head of painting conservation at the Städel Museum, which included the removal of patches on the reverse, the closing of minor canvas tears and the removal of two yellowed layers of varnish as well as older retouching. In this way, the painting's appearance was restored to approximate its original state. Not only is the original colouring recognisable again, but also the perspective of the entire picture composition as intended by the artist. A frame profile frequently used in the 1920s and 1930s was suitably copied for the Oelze painting and given a setting typical of the period.

Within the Städel Collection, Archaic Fragment complements the Oelze painting Dangerous Desire (1936), already acquired in 1979. The two paintings - together with three other privately owned works - are at the centre of a newly established cabinet presentation in the Sammlung Kunst der Moderne, which provides a concentrated view of Richard Oelze's work and his innovative and independent position within the Surrealist movement. The presentation runs until 21 October 2018 in Cabinet 1.11.1 of the Städel Garden Wing