Staffing shortages at restaurants and hotels
from FFM Aktuell 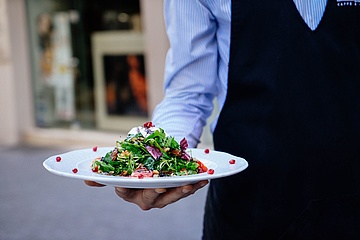 Bright sunshine, expanded outdoor dining and relaxed Corona regulations for restaurant patrons and travelers: One would think that with the end of the multi-month lockdown, the signs for restaurants and hotels are pointing to new beginnings and a more positive future. To some extent, that's true. But even as diners return, restaurant, café and lodging operators face a very different problem: They simply lack staff.

Especially in regions that are strongly oriented towards tourism, but also in a big city like Frankfurt, knowledgeable professional staff is desperately sought in many places. The reason for the problem: Numerous staff members have given up their jobs during the lockdown and have looked for something new - often in completely different professions. Getting these staff back is enormously difficult, not least because of the still uncertain situation - even if another lockdown can be rather ruled out due to the vaccination quota.

This creates an extreme dilemma: Hoteliers and restaurateurs would like to offer more service, but they lack the staff to do so. But if there are deficiencies in the service and the offer, guests quickly stay away, which in turn makes more investments - for example in additional staff - impossible. It is therefore all the more important to recruit staff as quickly as possible - whether for the kitchen, the service or for work in the administration. In this context, it is likely to be particularly important to win back such employees who have since changed jobs. And that is precisely what will still present employers in these sectors with enormous challenges in the coming months.

That is admittedly not a particularly good outlook. In addition, a city like Frankfurt in particular has had to report the closure of some long-established businesses - both in the hotel sector and in the gastronomic and cultural sectors - time and again since the first months of the crisis. But there are also many positive signals. For example, James Ardinast, board member of DEHOGA Frankfurt and the Initiative Gastronomie Frankfurt e. V. (IGF), said: "Of course, it makes a lot of sense. (IGF): "Of course, the pandemic is making it anything but easy for our industry to operate successfully. However, many restaurateurs are managing to defy the effects of the two lockdowns and the restrictions in force with stamina, courage and creativity."

For example, there are numerous new openings and expansions. One example is the "Sunny Side Up", which has now opened a second location in the Nordend after a successful start in the Westend. Café owner Dennis Burkhardt can hardly complain about staffing problems. "Of course, it was an athletic challenge to manage our 18 employees through the lockdowns," he says. He and Ana Maria Myers del Alamo opened his first all-day-breakfast café in Frankfurt's West End in 2019, with the option of a second location "if our concept catches on." It did, even in "take-away mode." With the start of the second lockdown in December, Burkhardt and del Alamo remodeled a former bookstore in the North End with about 120 square feet of space, preparing for a July 2021 opening. With this expansion, the Sunny Side Up has hired 30 new employees. Around 200 people applied for the job advertisement. "We relied on modern channels like Instagram, LinkedIn and Stepstone and introduced ourselves in various short videos to whet young people's appetites for the business," Burkhardt says, explaining the huge success of his job postings.

This makes it clear that the staff shortage in particular poses enormous challenges that can be overcome not only by using traditional channels, but also by coming up with new, creative ideas. As in all industries, there is still a long, hard road ahead for all involved, but fortunately there are not only bad news, but also positive examples that give hope and courage.