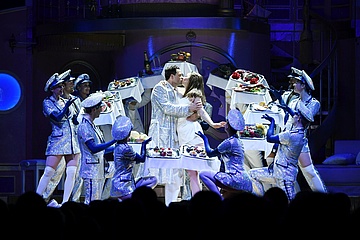 Over 4 million people have so far seen the musical "Ich war noch niemals in New York", based on the songs of Udo Jürgens. After ten successful years at fixed venues, the show, produced by Stage Entertainment with the help of concert promoter Semmel Concerts, is now going on tour, which is guaranteed to boost attendance. Until 07 January the play can finally be seen in Frankfurt. Saturday was the big premiere at the Alte Oper, which was concluded with standing ovations and never-ending applause.

But where does the success come from? It can't really be the story of two old people who follow their great dream of taking a ship to New York to get married under the Statue of Liberty, but which their children want to prevent. Because this one, as amusing as it may be, is very simple and predictable in itself. And it also can't be just the songs, because you've heard them countless times before. It's rather the mixture that makes the whole thing so special. A good example is the song "Ein ehrenwertes Haus": For Udo Jürgens himself, this song was the perfect proof of what the musical should be: Not simply a stringing together of his songs, but a story in its own right, into which his songs are suitably integrated.

And indeed, the creators of the musical have succeeded in integrating the well-known songs - without having to change them lyrically in a big way - absolutely harmoniously into the story, which also puts the actual triviality of the story completely in the background. The charming comedy is simply fun, makes the audience laugh, but also has quite moving moments. With songs like "Father and Son" or "What's Important", there will probably be no one in the audience who doesn't have goosebumps.

In addition to the perfect mixture of story and music there are of course also very good actors, great costumes, a highly professional production and rousing choreographies. With some songs it is really hard to sit still on the chair. If you looked into the faces of the colourful audience at the premiere, you noticed one thing above all: "I've never been to New York" gives its audience a lot of joy. And that, in the end, is more important than anything else. Even if there would be reason for criticism in view of a few clichés or two or three slightly off-key notes, this is immediately nipped in the bud by the enthusiasm that passes from the stage to the audience.

Why so many spectators love the music of Udo Jürgens, but also the story of the musical, is completely clear at the latest after the great finale. And therefore there is only one conclusion for us: This rousing good mood musical should not be missed. There are still a few tickets available. Who wants to see the piece in the Old Opera House, but should hurry and quickly secure tickets!

<link https: www.frankfurt-tipp.de veranstaltungen s event ich-war-noch-niemals-in-new-york.html _blank>You can find more info about the musical and the seasons in Frankfurt HERE in our event calendar