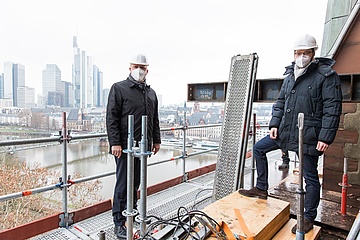 The tower of the Dreikönigskirche church on the Sachenhäuser Mainufer disappears for some time behind an 80-meter-high scaffolding. The months of this scaffolding is the starting signal for an extensive renovation, which is to last until 2023. The mayor and head of the church, Uwe Becker, as well as the head of the building department, Jan Schneider, were informed about this at a site visit. Over the course of the next two and a half years, damage to the façade will be extensively renovated and the roof will be re-roofed. In total, the city of Frankfurt am Main is investing around 3.2 million euros in the striking church on the southern bank of the Main.

"Since it was built between 1875 and 1880 by the cathedral master builder Franz Josef Denzinger, the Dreikönigskirche has had a very significant impact on the cityscape and thus plays an important cultural and architectural-historical role for the city," said mayor and head of the church department Becker. "It is a personal concern of mine that the church is kept in good structural condition. In this way, the city of Frankfurt am Main is fulfilling its obligations under the endowment contract, which regulates the maintenance of a total of nine churches." Head of the Building Department Schneider emphasized: "The Office for Building and Real Estate has extensive experience with the maintenance of historical monuments. The employees around project manager Christine Hammel can now apply this expertise to the Dreikönigskirche. Once the renovation is complete, we will have a jewel on the banks of the Main."

This renovation is the third and final stage of a major all-round refurbishment of the church. Already in 2011 to 2015, the facade and roof of the nave were repaired in two construction phases. The construction of the scaffolding already poses a special challenge. For structural reasons, it is being assembled in two sections. The lower section is already in place. For the upper section up to the top of the tower, a separate girder platform is being erected at a height of 40 metres. For this purpose, 13-meter-long steel girders were inserted through the masonry of the tower. These will carry the upper part of the scaffolding, which is to be completed by April. One of the challenging tasks here is to adapt the scaffolding to the tower's unusually steep helmet. Responsible for the planning of the scaffolding is the company HAZ from Marburg.

The renovation is being carried out according to plans by the office Planungsgruppe Darmstadt. The project is accompanied by extensive research by an architectural historian. The aim is to preserve the intact historic building fabric and to repair the damaged and weathered building components, taking into account the requirements of monument preservation and taking into account stability. Historical building techniques are applied. For example, lime plaster is planned for the façade. The color corresponds to the color scheme of the nave.

In the future, the tower of the Epiphany Church will also be inhabited: After completion of the renovation, a nesting opportunity will be created there for peregrine falcons, which have already enjoyed using the tower as a plucking ground to consume their prey undisturbed.