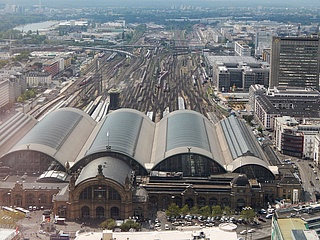 Frankfurt Central Station - an important hub, not only for the Rhine-Main region. But when long-distance trains and local traffic meet, this quickly causes traffic jams, longer train journey times or long waiting times at the tracks. In order to relieve this bottleneck at Frankfurt's terminus station, an additional long-distance tunnel with an underground station is to be built. This should reduce long-distance travel times by up to 8 minutes and also increase local transport capacity. Whether and how this can be technically implemented is now to be discussed in a feasibility study.

Enak Ferlemann, Parliamentary State Secretary to the Federal Minister of Transport and Digital Infrastructure, and Jens Bergmann, Member of the Management Board of DB Netz AG, gave the go-ahead in Frankfurt for the preparation of this in-depth feasibility study. The project is supported by the state of Hesse, the city of Frankfurt am Main as well as the Rhine-Main Transport Association and the FrankfurtRhineMain Regional Association.

The tunnel represents the central element of a future concept for the Frankfurt rail hub developed by the federal government's experts in the current 2030 Federal Transport Infrastructure Plan (BVWP). It is intended to solve the bottlenecks in the access to Frankfurt Central Station, one of the most important railway hubs in Germany, and to increase platform capacity.

For those responsible, the long-distance tunnel has the distinct advantage that long-distance trains will be able to use the new underground station directly in the future. The previous time-consuming turnarounds in the current terminus station could thus be eliminated. The additional tracks would also eliminate waiting times between trains in the current approach over the Main-Neckar Bridge and when entering and leaving the often busy platforms. As a result, long-distance trains could travel through the Frankfurt hub around seven to eight minutes faster. Last but not least, local transport would also benefit from the platforms and tracks freed up in the current above-ground station. Sounds quite positive in view of the fact that, especially at rush hour, fully occupied trains are left standing on open tracks!

In the federally funded study, which is now being prepared by DB Netz AG, the technical feasibility of a long-distance railway tunnel including a new underground station is to be examined as a first step. The study is not yet concerned with the actual planning of the project. Instead, it will be examined whether it is possible in principle to build the tunnel along different routes and what technical conditions and subsoil conditions can be expected. In this context, fundamental questions in particular are to be examined in depth, the cost estimate reviewed and the planning process structured.

On the basis of these results, approvals can then be given by the federal government for the further planning steps. In the first step, the effects of the project on the routing of traffic flows and the timetable (for example, the Deutschlandtakt) as well as the various options for connecting the new long-distance rail tunnel to the existing rail network will also be examined. For this purpose, a preliminary study area was marked out, which runs from Niederräder Bridge over Frankfurt Central Station in an easterly direction to Oberrad and Fechenheim. The results of the feasibility study should be available by the end of the 1st quarter of 2021, so that the federal government and the railway can determine the course of further planning at the Fulda Conference in spring 2021.

The federal government's solution concept for the Frankfurt rail hub with the long-distance rail tunnel project, which is included in the Federal Transport Infrastructure Plan, complements the existing Frankfurt RheinMainplus infrastructure expansion programme - which is currently being planned and implemented - by regional stakeholders and DB AG.

DB Netz AG, as the project sponsor, will keep the established bodies of Frankfurt RheinMainplus informed about the status of the study while it is being processed. This is because a joint and targeted approach is required from all those involved who have assured the project-executing agency, DB Netz AG, of their comprehensive support in achieving these objectives. To this end, DB Netz AG will set up an accompanying working group made up of members of the tried and tested Frankfurt RheinMainplus committees. As usual, the Federal Government will also ensure close planning support through BMVI and the Federal Railway Authority (EBA). All the players involved are united by the common desire for the feasibility study to progress quickly and successfully.