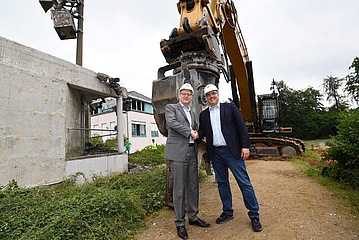 At the same time, a tennis offensive for tennis courts and tennis halls in the city districts with an investment volume of around ten million euros was launched in coordination with the Frankfurt Tennis District and the Frankfurt tennis clubs. Head of Sports Frank naturally does not only want to promote football and therefore stated: "With these measures, we are strengthening the tennis location Frankfurt as a whole - the preservation of the sporting diversity in Frankfurt is important to us."

Axel Hellmann, Chairman of the Board of Eintracht Frankfurt, added: "We are delighted that the breaking of the excavator today will make the redevelopment of the site and the construction of our new professional campus possible. We want to further strengthen our competitiveness in the Bundesliga with a modern infrastructure."