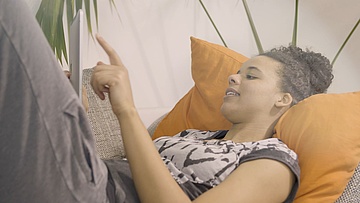 There's not much we can do about the Corona crisis. Adhering to hygiene rules and staying home - even if it's hard (especially when you're plagued by existential fears and insecurity), those are things that really help. In order to make this clear once again to the people of Frankfurt, Head of the Environment Rosemarie Heilig would now like to musically appeal to all Frankfurt residents to stick to hygiene and social distancing.

She gets help from rapper Janina Jackson and producer Jens Dietrich, who recorded the song "Stay Home" in the studio of the communications agency site-works in the city center. "Just 30 seconds - come wash your hands," the minute-and-a-half video says. "Stay cool and just keep the spacing. Do the moves, yo, good vibes in the house - just chill, chill and make it count . ." so it goes on seamlessly.

In the video, consequently, no outdoor shots are shown. The Frankfurt skyline remains outside. "That's how it is in times of Corona: &sbquo;Stay home' that goes for all of us. If you stay home, play by the rules, you act responsibly. That's cool. Not who violates it and thus puts himself and others in danger," said Environment Department Rosemarie Heilig on Friday, March 27.

The video was her idea: with it, the department head wants to reach those who do not follow the rules on time: Stay home, keep your distance, don't travel in groups. "Last week we had to close playgrounds, skate and scooter facilities due to the pandemic, Also the calisthenics facilities in the harbor park may not be used. I know this is hard for many athletes*," Heilig said. "An overwhelming majority of Frankfurt's citizens are complying with the ban. But another part - among them many teenagers and young adults - ignores the ban and continues to do sports there. A first consequence is, we had to close off the facilities now with a construction fence," said the Dezernentin.

The song is intended to sensitize and at the same time hit the right note: "Hey, you always wanted that. Regularly depend'n in your favorite room. The line runs hot - always be online. Stay yourself, stay healthy and stay at home", raps Janina Jackson. You can be sporty at home too, is the message of the 28-year-old. Jackson is an integral part of the Frankfurt rap scene and an active member of the collective "Hip-Hop Movement 069". In the video for "Stay home" she virtuously juggles apples to the beat, does pull-ups and plays football in the apartment. Not with a ball, though, but with a toilet paper roll. The symbol of the Corona crisis. "We hope that we hit the right note with this song to also reach all those who are now still careless with their health and the health of others," said Environment Director Heilig: "'&sbquo;Stay home', that's the only right thing to do at the moment."