Stop the war! Call for the big peace rally in Frankfurt
from FFM Aktuell 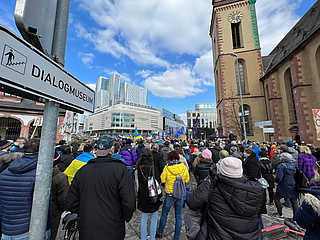 The war in Ukraine is causing dismay, fear, sadness and anger everywhere. It is now time to show solidarity with the people of Ukraine - a solidarity that knows no party or faith boundaries. For this reason, there are to be large simultaneous peace rallies in several major cities in Germany on Sunday, March 13. This is also the case in Frankfurt. The Catholic Church in Frankfurt am Main and the Protestant Church in Frankfurt and Offenbach, together with Mayor Peter Feldmann, are calling for participation in Frankfurt.

"The Russian war of aggression in Ukraine continues to terrify us. Our thoughts are with the people in Ukraine who are currently experiencing indescribable suffering. The city of Frankfurt stands for democracy, openness and solidarity. Therefore, we are called upon to set an example: for peace and against war. Putin's troops must immediately withdraw from the Ukrainian territory, so that the dying finally comes to an end! At the same time, it is now our duty as Frankfurt residents to welcome all people who now have to flee Ukraine with open arms and offer them our help," said the Lord Mayor.

Los geht es am Sonntag um 12 Uhr mit einer Kundgebung auf dem Opernplatz. The subsequent demo leads via the Taunusanlage and the Anlagenring at the fair to the Bockenheimer Warte and from there via Bockenheimer Landstraße back to the final rally in front of the Alte Oper.

At the rally will speak:

Singer FEE will provide music. The moderation will be Micaela Leon and Philipp Jacks

You can find more info at: https://stoppt-den-krieg.de/