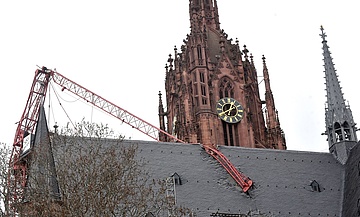 Shock moment in downtown Frankfurt: The storm "Sabine", which caused relatively little damage in the Main metropolis, caused the needle jib of the building construction crane on the cathedral to fall onto the roof of the south transept during the night from Monday to Monday. As a result, the roof of the side aisle has suffered considerable damage to the eastern and western roof surfaces. The ridge construction is also affected. </Of course, this sight terrifies you. It's a good thing no one got hurt. I never imagined that it would be so massive," said Lord Mayor Peter Feldmann. The cathedral is of immense importance, not only for the people who are religious, but for all Frankfurters, said the head of the city. For the city, it is one of the three most important buildings next to the Roman and the Paulskirche - after all, it was here that the imperial coronations took place. "Of course, we all now wish that the damage would be repaired as quickly as possible. There should be no lack of money for this," said Feldmann. </For mayor and head of the church department Uwe Becker it is also clear: "The cathedral is an important monument of our European cultural history and Frankfurt's landmark. And he adds: "Parallel to the investigations into how the building crane could have collapsed, we will assess the damage as quickly as possible. That will only be possible when the storm dies down. It is our priority that the damage caused is repaired promptly and that our imperial cathedral soon shines in its full glory again. </At the present time, no concrete statement can be made on the extent of the damage. In the course of the Monday the crane will be secured with the help of two truck cranes. In addition, a roofing company tries to seal the damaged roof to prevent consequential damage caused by water penetration. How quickly this work can be carried out depends on the further weather conditions. For safety reasons, the damaged crane can only be salvaged when there is no longer any risk of storm. According to current weather forecasts, this will not be the case before Wednesday, February 12th at the earliest. </I am very relieved that nobody was injured in the accident and that the surrounding residential buildings were not affected," said Jan Schneider, head of the department for construction and real estate. "However, it is tragic for my employees in the Office for Building and Real Estate that they had to accept such a setback after many years of good progress in the cathedral restoration. The roof, which has now been so badly damaged, has just been re-roofed. In the past few years we have proven that we are able to restore the monument to a good condition. We will tackle this task with renewed commitment." </p>

Especially annoying: The dismantling of the crane was planned for Thursday, February 13th, as the roof and facade renovation of the long and transept of the cathedral is largely completed. So a few days later this accident could not have happened at all.

The cathedral will remain closed until further notice. Due to the securing work, roads and pavements in the area of the Krautmarkt and Weckmarkt are currently closed.