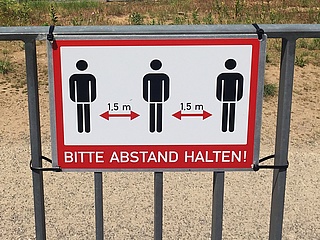 Today, Thursday (08.10.), as announced, the Corona measures that will apply from tomorrow, Friday, were concretized. One of the most important decisions is that the blocking hour was shortened by one hour and will now only apply from 11 pm to 6 am. This brings Frankfurt's decision in line with those of the cities of Offenbach and Berlin.

"Uniform rules create acceptance and trust," Mayor Peter Feldmann said after the meeting. "Citizens rightly expect that there will be no regional patchwork of Corona rules."

A solution is now also on the table for "Autumn in the City". The hygiene concept has been improved, opening with the Lord Mayor is now on Friday, October 9, at 12 pm. Feldmann said, "Thoroughness before speed, that's central in the Corona pandemic. I want parents to feel good about strolling through the market with their kids or letting them take a spin on the carousel."

Furthermore, at its meeting, the administrative staff specified the places, locations and facilities where alcohol will be banned from Friday, October 9, until at least the end of next week. The consumption of alcoholic beverages is prohibited all day in the following public places, locations and facilities, according to the general order adopted:

The general order also contains a survey>of the shopping streets in which from 9. October until at least the end of next week, wearing a mouth-to-nose covering will be mandatory:

.Accordingly, in the area of Berger Strasse, Schweizer Strasse including Schweizer Platz, Leipziger Strasse, Zeil, Goethestrasse, Oeder Weg from Anlagenring to Glauburgstrasse, Neue KrÃ¤me, KÃ¶nigsteiner Strasse, Braubachstrasse, MÃ¼nchener Strasse and KaiserstraÃŸe, as well as on KalbÃ¤cher Gasse and GroÃŸe Bockenheimer Strasse from Opernplatz up to and including Hauptwache, the mask is mandatory between 8 am and 10 pm. Excluded are the areas of seated outdoor restaurants.

For more measures and recommendations, see the original news article below!

"The situation is serious," Feldmann, Becker and Majer said. "We are firmly convinced: the majority of Frankfurt residents understand that the measures we have adopted are necessary to contain the pandemic. Our goal is to prevent another lockdown. This would have dramatic social and economic consequences."

As we told you yesterday, the number of cases of people infected with the Corona virus in Frankfurt has risen significantly in recent days. In the past seven days, the number of new infections in Frankfurt has been 46.5 (as of October 6, 11am). This means that Frankfurt is about to reach the fourth warning level of the prevention and escalation concept of the state of Hesse.

Mayor Peter Feldmann and Head of Health Stefan Majer today presented the measures that have been adopted to prevent a further increase in the number of cases. Specifically, the new escalation level requires a consistent restriction concept to contain the pandemic, as well as closer cooperation with the COVID-19 planning staff of the Hessian Ministry of Social Affairs and the supply facilities.

Probably the most drastic measure is the establishment of a curfew from 10 p.m., which - like the rest of the measures - is to apply from Friday (09.10.) until initially 18 October. The curfew will primarily affect the catering industry - restaurants as well as bars and pubs. Not affected are cinemas, theaters and concerts, always provided that there is a corresponding hygiene concept, which is also consistently observed.

Also under discussion is the staging of "Autumn in the City", which we introduced to you yesterday. Before that event kicks off at various downtown locations, a decision will be made on whether it's enough to tighten up the sanitation. However, the opening scheduled for Thursday at 12 noon will have to be postponed, which again is a major setback for the showmen involved. We will of course keep you updated here.

These are the Corona measures that will apply to Frankfurt from 09.10:

.- Restriction on the number of people at private parties in public spaces to 25 people, in private spaces to 10

- In high-traffic shopping streets and malls, there is a requirement to wear mouth-nose protection. Exactly which streets that will affect will be determined Thursday morning. It is also important to know that the increasingly common chin visors are NOT considered a substitute for a mouth-nose guard, as they offer no protection from a virological point of view.

- In public spaces, the consumption of alcohol will be prohibited all day. This applies to squares, streets and green spaces. This will also be specified again on Thursday.

- For religious celebrations, a mask requirement analogous to religious services will apply.

- In individual traffic, mouth-to-nose protection is recommended for several people.

In addition, it will still be discussed in the coming week whether a mask obligation should be ordered in classes at secondary schools.

"There is no reason for panic," said Feldmann and Majer at the press conference, but underlined: "The situation is serious. Now it depends on each individual. Keep your distance, wear a mask and wash your hands regularly. And: If you are planning a celebration, consider whether it can be postponed or organized on a smaller scale. Remember, your actions alone will help determine the course of the pandemic."