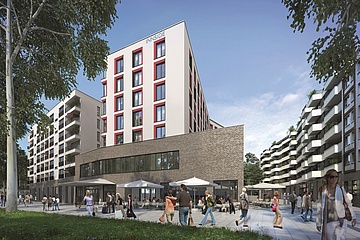 In early October 2016, Spanish hotel group Meli&aacute; Hotels International, whose global portfolio includes more than 370 properties, opened the Innside by Meli&aacute; Frankfurt Ostend, a four-star superior hotel in the newly developed "The East" building complex in Frankfurt's Ostend district. The premium location directly opposite the European Central Bank, excellent transport links and walking distance to the Römer and City Hall make the new hotel in the former industrial and working-class district, which is rapidly developing into a new creative centre, equally interesting for business travellers and city tourists.

Following the special design concept of the premium brand Innside by Meli&aacute;, the stylish domicile offers 168 rooms and suites on six floors in a contemporary, elegant-puristic ambience. The modernly furnished rooms are dominated by monochrome white, black and silver colour schemes to match the refined wood look of the floors, which are given eye-catching purple accents by effective indirect lighting. All rooms and lifestyle suites feature king- or queen-size beds, individually controlled air conditioning, 40-inch LED TVs, complimentary soft-drink minibar, free Wi-Fi, desks with media hubs and high-speed Internet access, and an open bathroom concept with rain shower. Six fully air-conditioned daylight event rooms, which can be flexibly combined with each other and are equipped with state-of-the-art media technology, cover a total area of 380 square metres and are recommended for a wide variety of events with a capacity for up to 250 people. This four-star superior conference offer is currently unique in the Ostend. Those who want to keep fit while travelling or relax at the end of the working day can work out in the fitness room, which is equipped with state-of-the-art equipment, and then relax in the sauna area with rest and massage room. 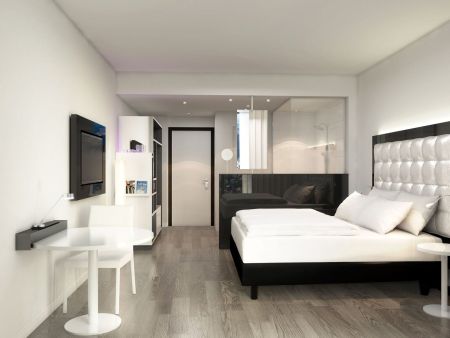 With a mixture of trendy ambience, entertainment and communication centre, "Stock Avenue 81", a hybrid mixture of restaurant, hotel bar and outdoor terrace, comes up. On around 200 square meters on the ground floor, the Innside Frankfurt Ostend also presents non-hotel guests with varied, international crossover cuisine with a local touch. This includes dishes from the grill as well as "food-to-share", small snacks to share and enjoy together. Selected wines and cocktails complete the food selection. An atmospheric background is provided by a music program adapted to the time of day.

The management of the hotel with its approximately 50 employees is in the experienced hands of Andreas Spitzner (49). A native of the Palatinate region, he earned his MBA degree in tourism management in Switzerland and the United States after completing his hotel management training. Among the first stations in the hotel career of the design- and architecture-savvy cyclist and fitness enthusiast, who started at the reception of the Maritim in Darmstadt in 1989, are very different positions in various German Maritim and ArabellaSheraton hotels. Before becoming General Manager of the new Innside Frankfurt Ostend, Andreas Spitzner was Deputy Director at the ArabellaSheraton Grand Hotel in Frankfurt for three years, then moved to the Lufthansa Training & Conference Center Seeheim as Director of Operations, and then went to Hamburg for four years, where he was General Manager of The Rilano Hotel, before moving back to Frankfurt in early 2015 as Director of the InterCityHotel.

Spitzner is very familiar with the challenging Frankfurt hotel market and is convinced that the new hotel "will fill an important gap in the up-and-coming Ostend district. Due to the many new construction measures and ongoing structural changes, a very attractive quarter is maturing here around The East complex with its many creative forges, whose new face we would like to help shape with our lifestyle-oriented Innside brand concept."

Frankfurt is an important Meli&aacute;location in Germany

With the Innside Frankfurt Ostend, the Majorcan hotel chain once again underlines its commitment to Germany, the second-largest European market for Meli&aacute; Hotels International (MHI) group, where it will be represented by 26 properties, including 13 Innside hotels, from October. Originally developed in Germany and part of Meli&aacute; Hotels International since 2007, the Innside by Meli&aacute; brand is one of Meli&aacute;'s most successful and globally expanding city hotel brands. It stands for purist elegance, contemporary orientation and avant-garde flair. In 2017, another hotel of this brand, which is located in the four- to five-star segment, will open in Hamburg in this country. Around 20 new Innside will be launched worldwide by 2019. The latest international addition is in Manhattan. In Frankfurt, MHI already operates three other hotels with the Innside by Meli&aacute; Niederrad, the Innside by Meli&aacute; Eurotheum and the QGreenhotel by Meli&aacute;. In 2019, a property by the upscale brand Meli&aacute; will open. Explaining the obvious attraction of Frankfurt for his company, Kai Laml&aacute;, Area Vice President Meli&aacute; Hotels & Resorts EMEA and Managing Director Germany, said: "As a major business metropolis and transport hub, as a host of important trade fairs and congresses, the city of Frankfurt is one of the most interesting locations in Germany for us. In no other German metropolis are we represented with four hotels. We would like to participate even more strongly in the conference business here."

Till the end of the year, special opening rates apply to rooms and conferences at the Innside by Meli&aacute; Frankfurt Ostend. A standard single room, for example, can be booked from just 89 euros compared to the normal rate of 129 euros (excluding breakfast in each case) 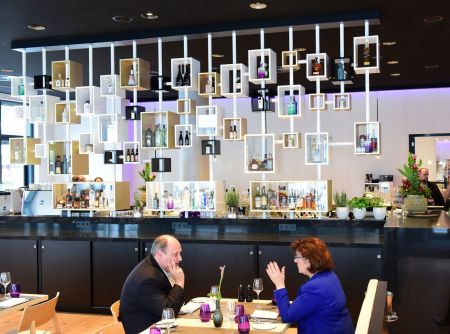 Opening offers until the end of the year from 89 euros (single occupancy excl. breakfast)