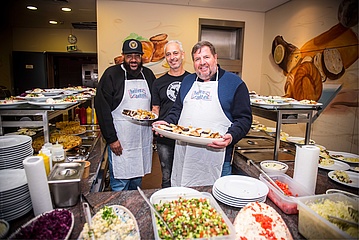 The first of a total of three events offered by the Bernd Reisig Foundation until the end of the year for homeless and needy people in Frankfurt went over very successfully last week. On Thursday, October 28, Bernd Reisig, chairman of the foundation, together with the musician and producer Moses Pelham invited to a vegan meal for the homeless. At the same time there was the possibility to get vaccinated against COVID 19 without any complications. 200 people accepted the invitation to eat at the Ratskeller in the Römer. "Of these, significantly more than half had already been vaccinated," Reisig reported after the event.

"Low-threshold offers are particularly important for homeless people," Reisig continued, "also and especially with such an important topic as the Corona vaccination. I am very pleased that the Frankfurt Health Department and doctors from the University Clinic have agreed to make this offer possible - both in terms of the medical side and in terms of counselling the homeless." A total of ten people took up the offer of a vaccination.

The food in the Ratskeller had been donated by Nir Rosenfeld of the Kuli Alma restaurant. His team served homemade potato salad, Israeli salad, baked potatoes, hummus and kebabs, among other dishes. A good 42 volunteers supported the event.

A similar, second event is already taking place on 23. November in the Römerhöfchen at the city hall Frankfurt: Lars Obendorfer, Frankfurt's King of Currywurst, sets up then his "Best worscht in town" food truck and distributes to the homeless from 15 to 17 clock Currywurst, chips and a drink. On this day, the necessary second vaccination will then be offered.

With complete vaccination, homeless and needy people can then accept the third invitation of the Bernd Reisig Foundation: the traditional Christmas goose dinner at the Ratskeller on December 8. For this, numerous prominent personalities have already promised their help as "waitress" and "waiter", including patron Lord Mayor Peter Feldmann, football legend Reiner Calmund, Eintracht coach Oliver Glasner and Member of the Bundestag Gregor Gysi.

The Christmas geese will be prepared, as every year, by Christian Dressler and his team from the Lohrberg-Schänke. The food is supplied by REWE Bernd Kaffenberger from Bad Vilbel.

You can get more info about these actions and the work of the foundation at: www.berndreisigstiftung.de