Successful conclusion for the 11th Frankfurt Oktoberfest
from FFM Aktuell 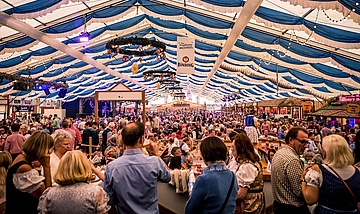 With over 60,000 visitors on 23 Wiesn days, the eleventh Frankfurt Oktoberfest came to an end on 06 October. The organizers, the Frankfurt festival hosts and also this year's ambassador Janine Kunze were very happy about this success. The last day brought one more highlight: the final in the Maßkrugstemmen, which once again crowned the final Frühschoppen.

"With the Frankfurt Oktoberfest, we have succeeded in establishing a new tradition. We can be proud of that," says Patrick Hausmann, who organizes the festival together with his brother Dennis and co-organizer Kai Mann. Mann had started this event eleven years ago together with senior Eddy Hausmann. "We're already looking forward to making it a dozen next year," he said. The first tickets for 2020 have already gone over the counter," brother Dennis proudly reveals.

When Oktoberfest ambassador Janine Kunze tapped the first barrel of specially brewed Festbier from Binding on September 11, people already had an inkling that 2019 could be a record year. The mood in the festival tent was exuberant from the very first moment - thanks to hearty music for almost every taste, excellent food from Hausmann's festival kitchen and an audience that simply wanted to celebrate. "Of the more than 60,000 visitors this year, over 90% really did come in traditional costume," reports Kai Mann. "That shows that a common experience is in the foreground here, which you might otherwise only find at football."

Whether Jimmy Wilson and the Weather Girls or the traditional Frankfurt Oktoberfest band already at the Fassanstich, whether old proven mood makers like Roy Hammer and the Pralin&eacute;es, whether Mickie Krause and NDW star Markus or Peter Wackel and the Trenkwalder, whether new acts like Oli P. with the 90s-Wiesn or the Schlagermafia with the Malle-Wiesn - they have all ensured a top atmosphere and a sold-out marquee.

To ensure that it was not boring in the glasses and jugs as well as on the plates, the Hausmann brothers have garnished their culinary offer with a few surprises again this year. In addition to the popular Hessian-Bavarian specialties from Handkäs to Semmelknödel, this year's new snack and menu items included game goulash with red cabbage (served with spaetzle and cranberry pears) and cheese spaetzle with onion topping. New on tap were a chocolate mint schnapps and a hazelnut liqueur, all of which were well received.

To conclude the eleventh Frankfurt Wiesn, there was the fifth and final Oktoberfest-Frühschoppen. The absolute highlight was the grand final in the Maßkrugstemmen, in which 20 women and men competed against each other. The winners were delighted to receive a voucher from the Obertauern Tourist Board for a one-week skiing holiday in a four-star hotel in Obertauern for two adults and two children, including ski passes, worth over 3,000 euros. The two runners-up each won a Condor flight to Cuba.