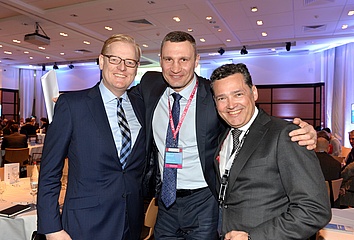 .(ffm) The outstanding ranking as the best German location for foreign direct investment gave great pleasure to the Frankfurt delegation, which was led by City Councillor for Economic Affairs Markus Frank on the first day of MIPIM 2019. Frank, who accepted the fDi awards for several excellent categories on Tuesday, 12 March, was delighted: "We have now been able to crown our city's outstanding rankings in recent years with the &sbquo;German Champion title' for foreign direct investment. For me as Head of the Department of Economics and Sports, competitions are the yardstick of our own performance. We are all the more pleased to leave cities like Munich, Hamburg or Berlin clearly behind us in the global ranking."

The Wirtschaftsförderung Frankfurt GmbH and FrankfurtRheinMain GmbH also see their work confirmed. Through the awards in the categories Business Friendliness and fDi Strategy, confirmed the direction of the city's economic development and the location marketing company organized jointly with the region. Head of the Department of Economic Affairs Markus Frank, who sits on the supervisory board of both companies, thanked the managing directors Oliver Schwebel (Economic Development) and Eric Menges (FRM) on behalf of all employees of the companies.

Commissioner for Construction and Real Estate Jan Schneider, also part of the delegation at this year's MIPIM, was impressed: "The fact that our city is among the top 10 Large Global Cities in the world in the categories of Human Capital and Lifestyle as well as Economic Potential and Connectivity explains the high level of investment in our location and the highly frequented exhibition stand in France."

The London-based trade magazine fDi (Financial Times Group) produces annual rankings of the most attractive European regions and cities worldwide. A panel of business experts as well as senior editors of fDi Magazine evaluate them based on indicators in the areas of economic potential, human capital and quality of life as well as cost efficiency, infrastructure and business climate. Marketing and fDi acquisition strategy as well as infrastructure regional planning projects also play a role in the ranking.