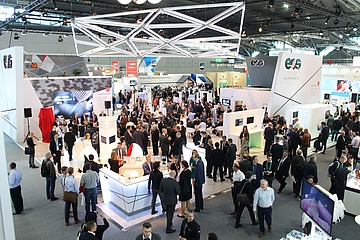 Messe Frankfurt continued to grow in the 2018 financial year. All in all, new records were set for the relevant key figures - proof of the very dynamic and innovation-driven activities of the corporate group. Messe Frankfurt expects sales of around €715 million. The more than 490 worldwide events held under the company's umbrella were attended by almost 102,000 exhibitors and around 4.5 million visitors.

Peter Feldmann, Chairman of the Supervisory Board of Messe Frankfurt and Lord Mayor of the City of Frankfurt, expressed his delight at these excellent key figures. "As a majority shareholder, we are proud to have a company like Messe Frankfurt in our investment portfolio." He added that the historically close ties between the city of Frankfurt and Messe Frankfurt have always spurred mutual development, not least through the economic effects that events trigger in Frankfurt and the region. In 2018, around 54 percent of total sales were generated at the Frankfurt venue, amounting to around €385 million. "In Germany alone, Messe Frankfurt generated close to 424 million euros. This is a new record and roughly corresponds to the sales generated by the next largest German competitors as total sales in the past," Feldmann highlighted.

Messe Frankfurt has strengthened its top position in international competition. "We have further globalised our brands and our worldwide acquisition activities have picked up speed," said Wolfgang Marzin, Chairman of the Board of Management of Messe Frankfurt, when presenting the preliminary top key figures for 2018. "Around 102,000 exhibitors - more than ever before - have placed their trust in us at almost 150 trade fairs and invested in meeting formats. Messe Frankfurt is a rock in this era of rapid digital development." The strong operating business also led to record financial figures in the financial year. With consolidated sales of around €715 million, we expect the highest sales in the company's history - and thus also the highest amount ever generated by a German trade fair company," said Marzin. Compared to the previous record year of 2017, this is an increase of around seven percent. There are historic bests in the annual net profit of around 59 million euros and in EBITDA (Earnings before Interest, Taxes, Depreciation and Amortisation) of around 133 million euros. "We have our own expansion strategy tailored to the group of companies, which we are consistently expanding. One of Messe Frankfurt's key unique selling points is its first-class global network," emphasised Marzin.

"If you want to hit the target, you need a goal - and in volatile times like these, a steady hand. We succeeded in this with another record number of exhibitors, 102,000 companies and around 4.5 million visitors to our international platforms. For me it is clear that our most important record is people", emphasised Detlef Braun, Member of the Board of Management of Messe Frankfurt. He added that there had also been a further increase in the internationality of the group's own events in Frankfurt. "On the exhibitor side, we are recording around 78 per cent and among visitors around 56 per cent coming to Frankfurt from abroad," said Braun, explaining the operative business: "The personal encounter is not in question, on the contrary, it is much more about intelligently combining the analogue and digital worlds. In this respect, we are working hard to position our events for the future." Messe Frankfurt invests continuously and sustainably in its worldwide events, in many cases and successfully also counter-cyclically. With the commissioning of Hall 12, the entire event portfolio in Frankfurt will be launched next year with optimised site concepts and clear hall structures, with the aim of further growth. Messe Frankfurt is increasingly involved in technological themes that exert a strong force of innovation and change on the industry worldwide. "Formnext and SPS are two events in the portfolio that represent Industry 4.0 in a particularly striking way," said Uwe Behm, Member of the Board of Management of Messe Frankfurt.

"And the congress and conference business at the venue is also a success story, with more than 170 events and 146,000 participants. With a total of around 280 events, we can report a very strong guest event year", Behm summed up. In the course of the new construction of Hall 5, Messe Frankfurt is taking the opportunity to revitalise the Congress Center. "We are certain that this will help us to further boost the congress balance sheet and further enhance Frankfurt's attractiveness as a conference venue," Behm emphasised. At the Frankfurt venue, Messe Frankfurt operates two congress venues, the Congress Center and Kap Europa, with over 90 congress and conference halls available on the site. The Kap Europa congress centre was fully booked in 2018. "There is also an extremely positive development in our Services business segment," added Behm, explaining, "With Messe Frankfurt Medien und Service GmbH and Accente Gastronomie Service GmbH, we now generate sales of around €100 million."

Outside Germany, Messe Frankfurt closely aligns its core business with its focus regions and partnerships.

With more than 30 premieres, Messe Frankfurt is demonstrating a growing global presence. In the reporting year, the company employed over 2,500 active staff worldwide.