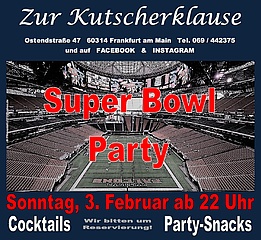 Super Bowl fever is also rampant in Germany again. And since last weekend it is certain what the pairing is at this year's final game: Los Angeles Rams against the New England Patriots

SuperBowl fans also have the opportunity in Frankfurt to watch this game together with like-minded people. So there will be in the CineStar Metropolis a live broadcast on the big screen. It starts on 03.02. at 22:45 o'clock. Infos and tickets are available HERE

You prefer to experience the game in stadium atmosphere? Then visit the big SUPER BOWL PARTY in the Commerzbank Arena. In the Business Club, an extra large screen will be set up to show the live broadcast in HD quality. In addition, there will be burgers, fresh wraps, chicken wings and more. Admission is at 10 p.m. All further information and tickets are available HERE

Who would prefer to experience the Super Bowl with real Frankfurt flair, come to the Kutscherklause in Frankfurt's Ostend! From 10 pm, the two landlords Monika and Jennifer Berkenkopf invite all football fans to their (actually known as "Eintracht pub"). Because this event is not only about the sport, but also about the whole surrounding and that includes the pre-reporting - before the game starts at about 0:30 (German time). During the whole night is provided in the Kutscherklause of course also for the physical well-being, "because according to experience it will go again until the early morning", so the football-enthusiastic Jennifer, which transmits this US sports highlight already for the third time LIVE in the Kutscherklause with her mother.

We wish all American football fans a lot of fun and an exciting Super Bowl night in Frankfurt!