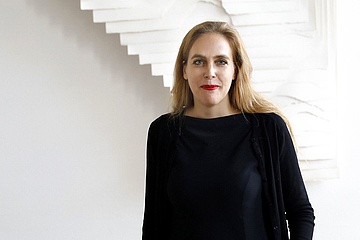 (kus) The search for a new director for the MMK Museum für Moderne Kunst Frankfurt am Main has been concluded. Susanne Pfeffer will take over as director of the museum on January 1, 2018. This was decided by the Magistrate at its meeting on Friday, 27 October. It has thus followed the proposal of the Head of the Department of Culture, Ina Hartwig, to appoint Susanne Pfeffer as the new director.

Pfeffer currently heads the Fridericianum in Kassel. Previously, she was chief curator of KW Institute for Contemporary Art in Berlin and concurrently curator and consultant at MoMA PS1 in New York, responsible for numerous exhibitions in Germany and abroad. Most recently, she has emerged as curator of the German Pavilion in Venice, for which she invited the Frankfurt artist Anne Imhof and which was awarded the Golden Lion as the best national contribution.

"I am delighted that the Magistrate has followed my request to appoint Susanne Pfeffer as the new director for the MMK Museum für Moderne Kunst Frankfurt am Main," says Head of the Department of Culture Ina Hartwig. "Susanne Pfeffer is an asset to the museum and the museum landscape of this city. Not only since the Venice Biennale has her name been known in the art scene. She will continue the museum's tradition of showing contemporary art with her own bold impulses and ideas. Susanne Pfeffer is one of the best connoisseurs of contemporary art and her international network will have an enriching effect on the city's art scene."

Pfeffer will take over the MMK Museum für Moderne Kunst Frankfurt am Main from January: "The postmodern architecture of Hans Hollein's MMK makes it possible to curate according to visual axes that constantly arise as one walks through the museum. No two rooms are alike here, just as no two works of art are alike. This allows visitors to engage in constructive dialogues and disputes between the various artistic works. The Museum für Moderne Kunst in Frankfurt has been a place for artistic and curatorial experimentation since its founding, so I am very much looking forward to this wonderful task, to the house with its three locations, its team, the unique collection, and to Frankfurt."

Susanne Pfeffer studied art history, theater studies, and philosophy at the University in Leipzig as well as at the Humboldt University in Berlin. From 2004 to 2006 she held the position of artistic director at the Künstlerhaus Bremen. After that, she was chief curator of Kunst-Werke Berlin for six years. Since 2013 she has been director of the Fridericianum in Kassel, where she has presented highly acclaimed group exhibitions, including "Speculations on Anonymous Materials", "nature after nature" and "Inhuman", as well as retrospectives of the artists Paul Sharits, Marcel Broodthaers and Tetsumi Kudo. In 2015 she curated the Swiss Pavilion at the Venice Biennale with a solo presentation of the artist Pamela Rosenkranz.

In addition to her academic qualifications and leadership experience, this dedicated art historian and curator has an impressive range of experience. Pfeffer has curated over 60 exhibitions, published numerous papers, organized philosophical symposia, and lectured nationally and internationally. As a guest curator, she has worked at the Tel Aviv Museum of Art, the Biennale de Lyon, Bienal de S&atilde;o Paulo, and the Museum of Modern Art in Warsaw, among other venues