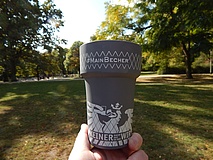 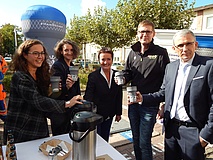 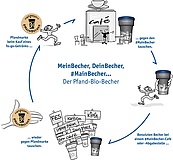 Sustainability is talked about everywhere. People are starting to realize how much waste they produce and that really Everyone needs to do their part to save our planet. In this time the to-go mentality of the last years doesn't fit at all. But how can we counter consumer behaviour that is geared towards constant availability, speed and convenience in a sensible and effective way? This is what Marlene Haas and Claudia Schäfer have been thinking about with their non-profit initiative Cup2gether, which has declared war on the mountains of waste created by to-go cups. In a pilot project, numerous Caf&eacute;s in the Bornheim, Nordend and Ostend districts, as well as over 1000 citizens, were won over to a novel deposit cup system. An initial success, but it was also clear to the two Cup2gether initiators: if we really want to make a difference, the deposit system must be expanded to the entire city - and for that we need a professional partner.

This was found in Frankfurter Entsorgungs- und Service GmbH (FES), which is now igniting a new stage of the ambitious sustainability project with the #MainBecher. Right at the beginning of the presentation of the deposit system, FES Managing Director Dirk Remmert showed that there is great interest in this. Never before had a press conference been so well attended, said Remmert. Rosemarie Heilig, head of the environmental department, was pleased about the great interest shown by the media, as she is very concerned about reducing the mountains of rubbish with which Frankfurt has to contend. For this very reason, she said, she was also very grateful to Marlene Haas and Claudia Schäfer, because without their commitment, the city would be nowhere near as far with the #MainBecher project as it is now.

In Frankfurt, an estimated 25 million disposable cups clog up the city's public wastebaskets or litter the public space every year. The citywide deposit system, including reusable cups, is expected to significantly reduce this number in the coming months and years. "The city of Frankfurt spends around 50 million euros every year on keeping streets, squares and green spaces clean," said Rosemarie Heilig, head of the environment department, at the public presentation. "As a member of the supervisory board of FES, I am proud that the #MainBecher offers another service for Frankfurt residents that puts waste avoidance in the spotlight. Because avoiding unnecessary waste must be our goal." The city councillor said she was particularly pleased that it had been possible to find a cup that was made entirely from renewable raw materials and was also compostable. "We really wanted to have a truly green system. If there's a cup that's made from a waste product of paper manufacturing by a small business in the region, it's the one for us."

Unlike other similar systems, the #MainBecher works almost cashless. Only at the beginning, lovers of mobile coffee drinking have to purchase a deposit token for three euros. The small wooden coin fits comfortably in the wallet and can be redeemed for the #MainBecher at the system participants. Initially, the cup will be offered in a 0.4-liter size; a smaller 0.3-liter version will be available in November. There will soon also be a lid in FES blue available for two euros, although this is not part of the deposit system. However, this lid can also be purchased from the system participants in the near future. An overview of all system participants can be found on the Internet page http://www.mainbecher.de. An app for smartphones will also be made available soon.

After a citizen survey, a neutral gray was chosen as the color for the cup. As motifs, the Frankfurt eagle, the #MainBecher logo with skyline as well as - small at the bottom - the FES slogan "Nobody does it like we do" adorn the cup, which is made of 100% recyclable materials. For Remmert, it's clear: "If you care about Frankfurt, you can't get around the #MainBecher." Marlene Haas and Claudia Schäfer are happy that their project is being continued by the city and the FES with great goals: "We are happy and grateful that our project is being consolidated in this way and is now being carried throughout the city with the FES. We would also like to take this opportunity to thank Frankfurt's Head of Economic Affairs Markus Frank, who, like the Head of the Environment, believed in the feasibility and timeliness of such an environmental project for neighborhoods, Caf&eacute;s and merchants and promoted this commitment. We are also happy for the many dedicated restaurateurs and consumers who can now finally be offered a sustainable alternative."

At the start of the deposit cup system, three Aral petrol stations, the canteen of the Philosophisch-Theologischen Hochschule St. Georgen and various other Caf&eacute;s and kiosks have already been won over. Discussions with other notable vendors are nearing completion. With the help of FES sponsoring partner Löwen Frankfurt, a door has also been opened to major sporting events in Frankfurt. Starting with 30,000 cups, the number is to be increased to 120,000 cups in the next year and a half. The system is also intended to establish itself not only in Frankfurt, but in the entire Rhine-Main region. To achieve this, as many system participants as possible must now be found who do not have to pay anything to participate - whether as a pure refill station, as an exchange station or with the full range of services. And then, of course, the consumers have to play along. One can be curious whether the number of discarded to-go cups in trash cans and green spaces will actually decrease.