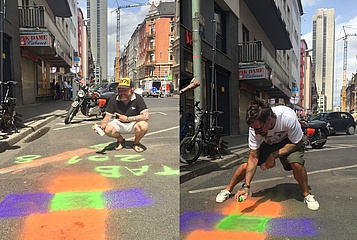 Just two days after the Bahnhofsviertel night, the quarter is already getting festive again: On Saturday, August 18, there will once again be the open air concert TAB Sounds in Taunusstraße, as last year again combined with a large art action. This is a continuation of the lantern project that bathed Taunusstraße in a very special light in 2017. <link https: www.frankfurt-tipp.de ffm-aktuell s ugc das-tab-projekt-bringt-die-taunusstrasse-zum-leuchten.html _blank>We told you about it HERE

The lampion umbrellas have been re-covered, which was again done by Tatcraft GmbH, and will be lit up for the first time on August 18. But that's not all: The street section at the intersection of Tanusstraße / Elbestraße to the intersection of Taunusstraße / Moselstraße will be painted in direct context to the lanterns in a unique street painting action, for which Florian Jöckel, music manager and president of the cycling club "Guilty 76" will be responsible. Actually, it is forbidden to paint streets in Germany, let alone spray them. But for this very special project, Jöckel and his team got a special permit from the city and don't have to worry about being arrested by the police like they were at the bike race in Oberursel.

The art project and the live concerts are expected to attract lots of people to the Bahnhofsviertel again. This year's trailer stage will feature GASTONE, singer/songwriter FEE and DANIEL WIRTZ, who just played in front of over 70,000 people at the legendary Wacken Open Air. The TAB Sounds Open Air is considerably smaller, but still something very special for Wirtz. Not only that he, as a resident, can step on stage quasi directly from his living room and is also quickly back in bed drunk after the big party. The atmosphere on the trailer stage is also so exceptionally good that you almost want to swap it for a stadium performance.

The evening starts with a short classical concert by the Bahnhofsviertel Classic e.V.. All artists perform for almost no fee. They, like the organizers and the city, are all about making a difference in the neighborhood. "We are working to ensure that there are no areas in the Bahnhofsviertel where you have to be afraid," says City Councillor Markus Frank. Police presence is important there, he said, but only a small part. A lot has already been done in terms of cleanliness, but a lot more work needs to be done on that. A third, very important aspect is also to attract more people to the quarter and to enliven it with gastronomy, culture and with a lot of commitment like the TAB project.

All those involved, including Le Meridien Frankfurt, Radu Rosetti of Walon & Rosetti, the creative agency esistfreitag or the Deutsche Designer Club e.V., would like an event like TAB Sounds to highlight the positive aspects of the Bahnhofsviertel. Project managers Björn Eckerl (Vier für Texas GmbH & Co. KG) and James Ardinast (IMA) are convinced that the commitment they and all the fellow campaigners have put into this project will pay off in the end. "It should be a great Saturday and we'll really let it rip," they promise. We'll definitely be there - will you?