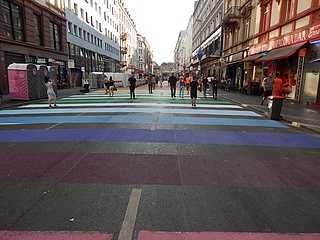 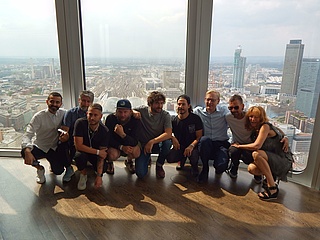 The Frankfurt Bahnhofsviertel is better than its reputation. Many people who live or work here are convinced of that. It is a special quarter. In a very small space, it represents everything that makes Frankfurt special - in both positive and negative ways. But it is also clear that there are major problems in the Bahnhofsviertel that need to be addressed. But for city councillor Markus Frank it is clear: "We don't want to just parade through the station district with steam jets or uniformed police officers. Rather, we want to try to show the different sides of the station district with the help of local artists." That there are some very nice ones of it, of it visitors can convince themselves on Saturday, 31 August, when the free open air festival "TAB Sounds" invites again to the merry celebration and dancing in the Taunusstraße.

Under the motto "Frankfurt at the sea" there is on this day not only from 17:30 clock much live music. The street also gets a colorful garb, which will be even more spectacular than last year. The Israeli stars of the street art scene from Tel Aviv, Yaron Mendelovici from Gelada and Pesh, have flown in specially from Frankfurt's twin city to design the Taunusstrasse, which will be closed to traffic from 6 a.m. on Saturday, and the roof of the recently reopened Kaiserpassage as a (temporary) work of art "Frankfurt by the Sea". The owner of the Kaiserpassage, DIC Asset AG, has commissioned a security concept for this and had hoops mounted on the roof. Also the 70 m long construction fence of the property Taunusstraße 52-60 will be designed by Frankfurt artists as a work of art and may remain until the end of the construction period (2-3 years).

In addition to wonderful street art, music is the focus of "Frankfurt am Meer". Once again, a truck at the corner of Taunus-/Moselstraße will serve as the stage. Starting at 5:30 pm, the top-class TAB Sounds OpenAir concert will begin with the young stars of the DJ scene, Behzad and Gazi as a full service DJ set, followed by the Neue Philharmonie Frankfurt with a crossover classical set specially adapted to the Bahnhofsviertel. As headliner Shantel invites with his complete Esembles Bucovina Club Orkestar to a street dance of a special kind. The evening will be hosted by Frankfurt-based musician Daniel Wirtz, who himself played music on the LKW stage last year.

For Wirtz, this event is a matter of the heart: "Taunusstraße is my home," says the musician, who is also patron of the Open Air Festival this year. He was also enthusiastic about how much support there has been from the city and the authorities in order to be able to implement the festival in this form. This was echoed by Councillor Markus Frank, Head of Economic Affairs and Security: "The pictures that are created here are anything but an administrative offence", he explains the positive decision of the authorities that the street may be painted. And he continues: "When we launched and promoted the TAB initiative at the end of 2014 after numerous and long discussions with the police, the regulatory authorities and many property owners, I would never have expected such pictures in my wildest dreams! All those who are involved here and contribute their ideas and time are very good at their job and those who are good have a lot to do and, conversely, little time. However, this project was also very time-consuming and has bundled a lot of energy - and it is also being done on a voluntary basis. That deserves my utmost respect."

The project manager of TAB Sounds is James Ardinast, a restaurateur from the Bahnhofsviertel and board member of TAB e.V. He is a busy man as it is. But he doesn't let his voluntary work for TAB e.V. get in his way: "My brother and I love this city. We want to show what is possible in Frankfurt. For us, the district has so much potential." Of course, it would be easy to always just highlight the bad sides. But there is also so much that is beautiful, creative and good in the Bahnhofsviertel, which makes his volunteer work so worthwhile.

Florian Jöckel travels the world as a music manager, agency owner and professional cycling coach and provided color and sound for "Frankfurt am Meer" on Saturday. The man of action and good humour has been involved in the design and implementation of the event around the clock and from all possible locations around the world: "TAB is a project by Frankfurters for Frankfurt - from the station district for the station district. It's an incredibly great chance to show the world what we're capable of here." And TAB could and wants to do much more. James Ardinast and Florian Jöckel present the vision developed jointly in the project group: In cooperation with the city and property owners, the Bahnhofsviertel could be successively transformed into an "Urban Street Art - Gallery". Every available surface - whether walls, roofs, ceilings and courtyards - would be carefully curated and made available as a canvas to the local, but also worldwide greats of the street art scene.

The TAB e.V. is an initiative of artists, restaurateurs and friends of the Bahnhofsviertel and always conjures up people with special talents out of a hat, who with a lot of heart and in an honorary capacity give their business card for the Bahnhofsviertel. It is all these people who make an event like "Frankfurt by the Sea" possible in the first place. Of course, one event a year like this is not enough to bring about lasting change. But it is an important step and the enthusiasm it generates among the public is an important motivational boost for all those involved to continue to join forces and work for their district.