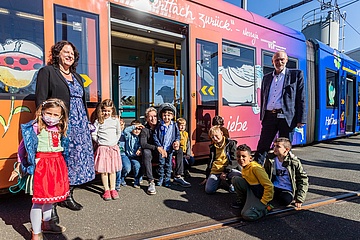 For almost 40 years, the little dragon Tabaluga has been flying through children's rooms - whether on CDs, as a musical, a movie or an animated series, Tabaluga has truly conquered millions of hearts of children and adults alike since 1983. Now the dragon is also travelling through Frankfurt - on a tram that was recently presented by Tabaluga co-inventor Peter Maffay, the Verkehrsgesellschaft Frankfurt am Main (VGF), represented by Managing Director Thomas Wissgott, and the City of Frankfurt, represented by the Head of Department for Education, Real Estate and New Building, Sylvia Weber, at the VGF depot Ost. In future, the tram will transport motifs and texts from the tale about the little dragon Tabaluga through the Main metropolis.

VGF managing director Wissgott said: "This tram is something very special - the theme and the values transported with it touch and move people. It will not only inspire children. Its 'fabulous' design stimulates and creates awareness for togetherness, cohesion and respect. We are very happy and proud about this extraordinary cooperation with Tabaluga co-inventor Peter Maffay."

"The beautiful Tabaluga train is a real 'eye-catcher' and creates attention for the basic values for a good togetherness such as hope, courage, confidence, consideration and love. The Tabaluga train brings fun and colour to our city and makes it even more colourful. I wish all the children and their families lots of fun on the ride and the Tabaluga train a safe journey at all times," emphasised Councillor Weber.

After brief words of welcome from those involved, a subsequent vehicle christening and some film and photo shoots, the train took off on its maiden voyage. In the driver's seat: Peter Maffay himself, who chauffeured his passengers - including around 30 children - safely through Frankfurt.

The idea for this special train originated with the VGF, which designs a small contingent of vehicles - tram and underground - on its own as part of its social-social commitment. In terms of content and theme, the trams designed so far in the cityscape are almost exclusively aimed at adults. Examples are the DiverCity tram for cultural diversity, the CSD/rainbow tram and the twinning trams.

The idea behind it is, especially in currently difficult times for children and families, to put children in the center, to find a motif that appeals to children and their families in a special way, has a warm, positive, emotional effect, triggers a positive perception in the entire cityscape, conjures up a smile on children's faces and perhaps also stimulates storytelling and reflection. The motifs of Tabaluga and Lilli and the values from the story about the little dragon Tabaluga fulfil these goals perfectly. They are familiar to young and old, childlike and emotionally evocative. The values of hope, courage, confidence, togetherness, consideration, love, which are placed with the motifs, are temporally neutral, significant and valid at any time. The fascination emanating from Tabaluga can be felt and experienced in the eyes of the children.

In addition, the design of the train also draws attention to the Peter Maffay Foundation, which has been in existence since 2000 and of which Peter Maffay is also chairman. With its diverse activities and facilities, the foundation's work is mainly aimed at traumatised children and young people, seriously and chronically ill children and children from crisis regions.

The graphic design of the train was created by Jan Langela, who has been creating train designs for the VGF for several years.

Further information on the people involved in this cooperation can be found at www.vgf-ffm.de, www.petermaffaystiftung.de and www.maffay.de.