TAKEOVER: Handover of the Historisches Museum to the Cultural Department of the City of Frankfurt
from FFM Aktuell 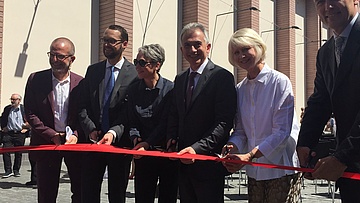 It took a long time to build and even longer to plan. And now the time has finally come: after ten years of planning and construction, the new buildings of the Historisches Museum, <link https: www.frankfurt-tipp.de freizeit s das-historische-museum-frankfurt-macht-stadtgeschichte-erlebbar.html _blank>Which we have presented to you in detail in our leisure tips, are ready. The new entrance building opened for business today.

When the construction fence has finally disappeared, the concept of the Stuttgart-based architectural firm LRO, with which it emerged as the winner of the international competition for the new building in 2008, will be apparent to all citizens. The aim of the concept was to create a complete museum quarter, combining old and new in equal measure with a large exhibition building and a smaller entrance building that complements the historic old Saalhof building.

"The new Historical Museum is a place where Frankfurt residents and guests can explore the history and present of this city. The work of the History Museum has undergone a major transformation in the last ten years since the plans for the new building were set in motion: a specialist museum of history has become a modern city museum," stresses Lord Mayor Peter Feldmann.

The new LRO building therefore also takes a stance that says a lot about the changes that have taken place over the last 40 years in the way history, its remnants and traditions are dealt with. At around 60 metres long, the large exhibition building stands like a large warehouse in the city. Its shell is structured by many small and a few large openings. It is unmistakable due to its striking double gable roof and the prominent gables and projecting oriels, also with its 24 large niches, each eight metres high, which already show from the outside what is to be seen inside: remains, fragments, pictures of history, which are put together in the museum to form new pictures. The new museum square and the large flight of steps open up a new quarter in the old town. The Staufer palace of the Saalhof and the Wertheim House are brought into view as visual axes. The city is thus incorporated into the museum, the formerly hermetic museum courtyard now belongs to everyone, the museum integrates itself into the city.

After the milestone of the takeover, the work in the new exhibition house and under the Museum Square continues at a fast pace: two new permanent exhibitions, the scenographic treatments of the Frankfurt Model, the Snow Globe, the Staufer Harbor, and the construction of the Library of Generations will be realized until the opening of the exhibition house in October 2017. To complement this, preparations are underway on the first special exhibition "A new museum for Frankfurt - The making of HMF", which will be shown at the opening on level 0 in the special exhibition room.

This is also where the Museumscaf&eacute; by Martina and Kay Exenberger, where visitors can enjoy typical Frankfurt dishes at reasonable prices. The successful concept of combining quality and freshness with modern interpretations of classics is now being implemented by the experienced gastronomic couple at Caf&eacute; Frankfurt in the Schneekugelfoyer under Museum Square. Due to the special situation of the site, it is connected to the Karolinger-, the Staufer- and the Burnitzhof via an outdoor terrace, and also to the Museumsplatz above via a staircase. Diners can be assured of dishes that taste great in a very special atmosphere. In October, a second Caf&eacute; will open in the customs building. The historic building of the old Saalhof building housed the entrance to the museum during the interim period.

During the civic weekend "TAKEOVER - Friendly Takeover" on May 20 and 21, the house will be open from 10 am to 5 pm, admission is free. From 23 May 2017, the Historisches Museum Frankfurt will be open at the usual times. There will be no changes to admission prices.

(kus) All Frankfurt residents and visitors to the city are invited to explore the new Museum Quarter on May 20 and 21. Jan Gerchow, the director of the Historisches Museum, will speak on the occasion of the "friendly takeover" about successful city labs, participation, the future direction of the house and the unique opportunity to be allowed to rethink an entire museum.

Mr. Gerchow, so close to the end of construction - how do you feel?

We are not yet at the end of all our efforts. On May 20 and 21, we invite the citizens to the "friendly takeover", and we will open the museum at the end of September, beginning of October. Only then will ten years of intensive work be completed. Until then we still have a lot to do: We set up the exhibitions, assign the exhibits their places - that is the culmination of all preparations.

What can visitors expect at the "friendly takeover" on 20 and 21 May?

We are opening the building fence for the first time, everyone is cordially invited to discover the new museum quarter and the square between the new and the old building. There they can get a close-up view of the spolia and the sculpture collection on the facades, take a look at the Stauferhafen, visit the new foyer and the gastronomy - the Caf&eacute; Frankfurt will be open from the citizens' weekend.

What does the History Museum of the future look like?

Our house will be a place of diversity - there cannot be one exhibition for everyone. Instead, we will make different offerings for different audiences, depending on their time budget or prior knowledge, their age or even their background. Global guests who only have half an hour should be just as happy to visit our house as visitors from the region or cultural travellers who want in-depth information. In the new Museum Quarter we will always have eight offers in parallel.

From a specialist museum for history to a city museum - how do you make this step?

The Historical Museum is not a house for special interests, we are the universal museum for Frankfurt. As a city museum, we play a special role in the 21st century: half the world's population lives in cities, this is where people arrive, where globalization and migration take place, where what moves people becomes visible. Our task is to involve citizens and guests and to make this multiperspectivity visible in the museum - alongside our mission to preserve and exhibit Frankfurt's history.

How do we succeed in this?

For example, by inviting our visitors to actively contribute to our exhibitions with comments or to participate in the development of shows in advance. We want citizens to participate, to share. We contrast the individual curator with a multi-voiced collective. There are those who think this is arbitrary and difficult. For our team, it is a productive collaboration.

Were the city labs of the past seven years a test run?

We wanted to offer the many experts outside the museum walls the opportunity to contribute with their knowledge, their projects or collections. With the city labs, we were able to test what works and how it works, and find that there are many museum volunteers in Frankfurt: around 500 have already participated, and many want to continue. We will cultivate this valuable treasure.

Can you name a project for the future?

In the exhibition "Difficult Things" we address legalized art theft during the Nazi era and ask the people of Frankfurt: What do you know about objects, furniture or even real estate that came into your family's possession during this time?

Is the Historical Museum setting standards with its participatory approach?

In the professional world, our move is receiving a lot of attention. We are among the first to try it to this extent - participatory work has not been very widespread in Germany so far, coming from the Anglo-Saxon world. In Frankfurt it is not entirely new, the Historisches Museum already made its first attempts in the 1970s.

You have been director of the Historisches Museum since 2005 - was it already clear at that time that there would be a new building?

No. I was asked whether I could imagine a new building. But the only thing that was certain at that time was that the old concrete building would have to be renovated. At that time I was very sceptical about a new building. I had the so-called Cologne Hole in mind - the new building of the Rautenstrauch-Joest-Museum, which was a construction pit for 15 years.

I still didn't think it would take ten years. Originally it was supposed to open in 2012. Then the historic Stauferhafen was found, which brought a year of construction halt, we had to part with several companies. The museum was completely closed for a year before we were able to reopen the renovated old building in 2012 with the Saalhof, Bernus-, Burnitzbau and Rententurm. In the meantime, the limit of excitement has been reached. We are all looking forward to the opening of the museum in autumn.

The old concrete annex from 1972 was considered by many to be the ugliest building in the city. What did you think of it?

It was a cultural building of its time. It looked like a comprehensive school - and that's what it wanted to be: a place of learning, not a museum temple, a place that didn't command reverence but was meant to be used by everyone. A cultural temple can be a threshold, especially for people who don't come from the cultural bourgeoisie. They wonder whether they are allowed to go in, whether they are in the right place.

Would the new orientation of the History Museum also have been possible in the renovated concrete building?

Of course we would have thought about the content and offerings for the future even without a new building. But the decision for a new building has inspired our willingness to give up what we were used to. We were able to completely rethink the identity and orientation of the museum. A unique, fantastic opportunity. With the mortgage of working for ten years to make it happen