Taking the subway to the Berger Street Festival
from FFM Aktuell 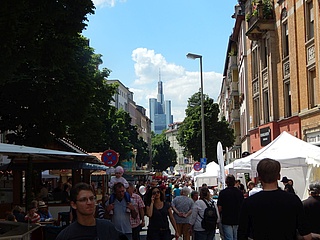 U4 without interruption through the night to Sunday

When after a two-year break on the weekend Saturday, 28., and Sunday, 29 May, finally again the Berger street party takes place, then again thousands of humans with Frankfurt's most popular street party are expected. There will not only fill the seats in front of the music stages and at the numerous gastro and sales areas. There will also be no getting through on the streets around the cordoned-off area. Therefore, for all those who cannot come on foot or by bike, arriving by public transport is absolutely recommended. The fastest way and without the annoying search for a parking space is to take the U4 subway line via the stations Merianplatz and Höhenstraße to the Festmeile.

On Saturday, the U4 runs longer at denser intervals, starting at 2 p.m. every five minutes and at night until 1:30 a.m. every seven to eight minutes between Seckbacher Landstrasse and Bockenheimer Warte - twice as often as usual. Late-night commuters will also be able to return, as the U4 will run all night. On both days, it offers more space due to additional cars.

You can find out more about the Berger Street Festival HERE