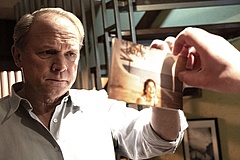 On Sunday, September 25, all of Germany is invited to the Kempinski Hotel Frankfurt. However, you do not have to go to Neu-Isenburg for the visit, but can sit comfortably on the couch at home. Because in Tatort, which airs this Sunday at 8:15 p.m. on Ersten, the hotel has become the scene of a crime. For "Murot and the Law of Karma," the film team spent several days shooting at the hotel last November. Striking locations such as the K Lounge, the main entrance, the lobby or the Smoker's Lounge are easily recognizable in many scenes. "Our hotel does not play the main role, but an important supporting role," hotel director Karina Ansos is pleased to say. "After we accompanied the filming over several days and were able to follow the creation of one scene or another, my entire team and I are now very excited about the finished film."

In hr-"Tatort" from Wiesbaden, Ulrich Tukur investigates as detective superintendent Felix Murot and Barbara Philipp as investigator Magda Wächter. And that's what this episode is about:

Commissioner Murot (Ulrich Tukur) is involved in a conversation at a hotel bar by a younger woman (Anna Unterberger). Over a glass of red wine, Murot plays with her, pretending to be an insurance agent in a good mood. The next morning he wakes up in his hotel room, without his wallet and with no memory of what happened. Murot conceals from his co-worker Wächter (Barbara Philipp) that he has been robbed by a con artist. But Wächter is already watching him suspiciously, because the same night a high-ranking IT expert (Dirk Martens) was found murdered in the hotel. There are suspicions that the con artist is involved in the murder and the disappearance of an explosive laptop. While Watchman eagerly investigates the case, Murot is confronted with his past: The young woman has crept into his life, forcing Murot to reconstruct incidents that occurred on a vacation trip many years ago. Murot is creeped out by the fear that he has brought guilt upon himself.

Matthias Oberg directed this eleventh "Tatort" episode with Tukur as Felix Murot, and Max Preiss was behind the camera. At the Festival of German Film in Ludwigshafen, the episode was nominated for the Rheingold Audience Award.