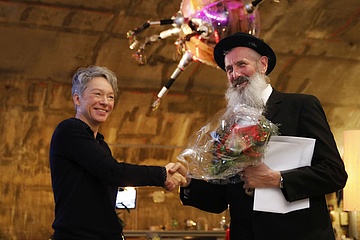 (kus) Head of the Department of Culture Ina Hartwig congratulated the Kunstverein Familie Montez on its tenth anniversary on Thursday, December 21, and promised additional project funding of 5000 euros. The money can be used to plan exhibitions with Frankfurt artists in the coming year. "In addition to the established exhibition houses, there is a need for places like these where the independent scene can develop and present itself. Warm, raw and unpretentious - a mosaic stone in Frankfurt's diverse cultural landscape."

In September 2007, artist Mirek Macke and Anja Czioska founded the art and party off-space Lola Montez at Breite Gasse 24, an association dedicated to promoting and supporting contemporary art. In 2013, the association had to move out of its original location in Breite Gasse, not without protest from the public. In 2014, it reopened under the Honsellbrücke in the Ostend. The city of Frankfurt had granted the Kunstverein the space in the course of the redesign of the Osthafenpark. During the construction period, "Montez in Exile" was launched, a touring exhibition through seven German cities co-financed by the Cultural Office. It is the cornerstone of the Montez Collection, as what began with 30 works on tour got new artworks added at each location.

"Mirek Macke has achieved a lot through the cohesion of his family of artists, his talent for improvisation and his enormous passion for art. I hope for many more years of Mirek Macke and the Montez Family Art Association enriching our city with their diversity and creativity, surprising and challenging us," concluded the Head of Culture.

More info on the Montez Family Art Association can be found at: <link http: kvfm.de _blank>Http://kvfm.de/