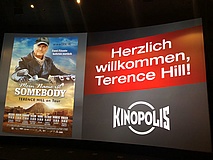 How loyal his fans are in Germany, of which Terence Hill could get an impressive picture in the last few days. On an extensive cinema tour he presented his passion project, the road movie "Mein Name ist Somebody - Zwei Fäuste kehren zurück". The actor, now 79, spent ten years working on the project and dedicated the finished film to his longtime partner and friend Bud Spencer. When it was announced that Terence Hill would personally present his new film on a cinema tour, the first dates were quickly sold out. In Dresden alone, over 5,000 fans attended the premiere, enthusiastically celebrating Hill, who lived in the town of Lommatzsch near Dresden as a child. The cinema tour was then quickly extended to include further dates. Tickets for the additional dates also went like hot cakes.

In Frankfurt, Hill first made a stop at the CineStar Metropolis on Saturday before coming to the Kinopolis in the MainTaunus Zentrum for no less than three completely sold-out performances. Here he was frenetically celebrated by numerous fans, quite a few of whom wore shirts with his likeness and that of his colleague Bud Spencer. The actor was visibly moved by the enormous euphoria and his already bright blue eyes seemed to sparkle even a little more. During the welcome in the cinema hall, Terence Hill showed himself as a very down-to-earth, likeable artist without any airs and graces. And even at 79, he was as charming and vital as ever.

Fans listened in rapt attention as Hill talked about his new film and shared anecdotes about Bud Spencer. There was often hearty laughter along the way - such as when Hill revealed that Spencer used to say to him, "You eat a lot more than I do and I get fat" - and for many, wonderful childhood memories were evoked as well. No wonder the movie theater literally shook with applause when Hill had to leave his fans again. They were enthusiastic and grateful for a very special evening with their idol. Probably the collective enthusiasm was also due to the fact that it was obvious to Terence Hill that he was also very grateful for the loyalty and enthusiasm of his German fans - precisely because his latest work is so close to his heart.

After "My Name is Somebody - Two Fists Returns" was shown on the big screen as part of the cinema tour and in some special screenings, the film will still be released on DVD and Blu-ray in the fall.