Test for a car-free Mainufer
from FFM Aktuell 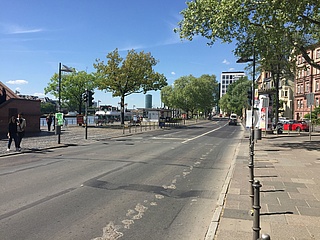 Will Frankfurt get a new promenade? Will the northern bank of the Main become a car-free zone? Plans for this have been around for a while, with the closure of the east-west link on the Mainufer having already been agreed in 2016 in the coalition agreement between the SPD, CDU and Greens. Now the nails are being put in the coffin - but initially in a one-year test phase that will start with the Mainfest in summer 2019. This was announced last week by the head of transport Klaus Oesterling.

The whole thing should look like this: Between Alter Brücke and Untermainbrücke, the road will be closed off by secure bollards, which could possibly also be retractable. There will be no major reconstruction measures, nor will the asphalt be torn up. If, at the end of this "completely open-ended" experiment, the conclusion is reached that the closure will lead to congestion on the alternative routes, it would not be desirable to have to dismantle the fixed installations that have just been erected. But one year would be enough time for drivers to get used to the new traffic situation. If the approximately 20,000 cars, which drive on average daily the then closed distance, drive without substantial disturbances of the traffic flow alternative ways, then also a durable closing could be decided - only then also with larger rebuilding measures.

For pedestrians and cyclists the experiment is just as pleasing, as for the resident catering trade, which then for instance more place for the external seating is available. However, Oesterling is also clearly against a tourist-oriented use of the closure. Rather, the residents as well as the citizens should be enabled a "quiet local recreational use".

The time until the closure in summer 2019 will now be used to clarify outstanding issues - legal, logistical as well as safety-related. But Osterling is optimistic about that. Any outstanding issues that would come with the closure are solvable, he says. Whether the test closure will be a success will ultimately be decided by the politicians. But no matter how the test turns out in the end, one can certainly be curious to see how the traffic-calmed path to the Mainufer is accepted by the Frankfurt residents and the many visitors to our city.