The Advent calendar in aid of the children and youth hospice services is here!
from FFM Aktuell 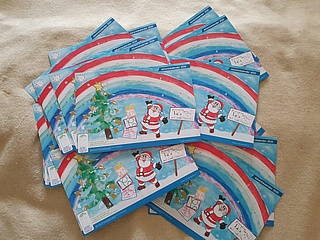 Once again this year, there is an opportunity to win lots of great prizes during Advent and do some good: The Advent calendar in favor of the children and youth hospice services (AKHD) in Frankfurt and Hanau has received the release from the city of Frankfurt, which the initiators, the sisters Anja Nickel and Petra Bickermann, are very happy about. The net proceeds of the calendar go - already in the seventh year - to the two Outpatient Children's and Youth Hospice Services. "We are again this year so really happy with our &sbquo;baby', says Anja Nickel, after it was really difficult at the beginning. "We started acquiring the prizes for the calendar in May - in the middle of the beginning of the pandemic - and many companies just had completely different worries." "But now we can be proud of all the sponsors who nevertheless agreed to support this project," Petra Bickermann adds, pointing out that "despite Corona, we were able to win over 50 new donors".

And this is what you can look forward to: behind the little doors of the 2020 calendars, a total of 750 prizes are hiding - from theatre tickets, to vouchers from restaurants, hotels and shops, to books and electrical appliances. Many attractive prizes therefore, which make a purchase of the calendar more than worthwhile.

For Anja Nickel and Petra Bickermann, as well as their six other co-founders of the association "KinderEngel-RheinMain e.V.. " but it is particularly important that the proceeds of the calendars go to the important work of the AKHD's, which care for life-shortening children and adolescents and their families!

"That's why it's so nice," shows Petra Bickermann enthusiastically, "that the calendar was designed by the 11-year-old Nele and her mother Nicole. The family has been accompanied by AKHD Frankfurt since 2012. "Due to the corona lockdown, we had a lot of time to paint", Nicole reports. Because due to a rare metabolic disease Nele belonged from the beginning to one of the risk groups.