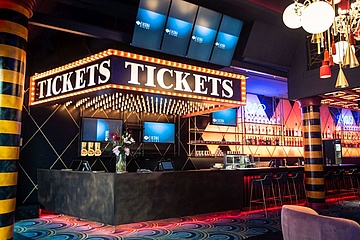 In addition to restaurants, museums or zoos, the current Corona ordinances in Hesse theoretically allow theaters and cinemas to reopen - if the appropriate hygiene and distance rules can be met. For many cinemas this is not an option. The two arthouse cinemas Cinema and Harmonie, for example, will remain closed, as so few seats are likely to be occupied in these houses that it would be more expensive to reopen the cinemas than to keep them closed. And also in Orfeo`s Erben or Mal sehn` the projectors will remain switched off for the time being. But it is not only the smaller cinemas that have decided against opening under the current regulations. Even the multiplexes CineStar Metropolis or the Kinopolis in the MTZ will only show films once a concept has been worked out that meets the necessary specifications while also making economic sense.

But one cinema is already venturing to reopen on Friday, May 15: the ASTOR FILM LOUNGE in the MyZeil Shoppingcenter. The premium cinema wants to offer you again film enjoyment of a special kind - but of course this is only possible with restrictions. Because for a long time to come, cinema will simply be a different experience to the one we have known up to now. It will take some getting used to, but it's nice that the first small step towards normality has already been taken. Patrons will have to do without a cloakroom or a visit to the lovely cocktail bar, just as they will have to do without new film fodder. Until the distributors will again bring new films in the cinemas, it will probably take some time.

Furthermore, similar rules apply to a visit to the cinema, such as a visit to a restaurant or a hairdresser. For example, the contact details (name, address, means of contact) of all cinema patrons must be recorded so that they can be contacted in the event of infection. When buying tickets online, the email address is sufficient as a means of contact. Tickets should be booked in good time, as seating capacity is currently severely limited.

More Corona rules at the cinema:

Entering the cinema is only permitted with mouth/nose protection. This may be removed as soon as you sit on your assigned seat. The selection of the seats is done by the staff.

At the seat can be ordered as usual. The service staff will approach you as usual before the movie starts. The usual welcome drink will also be served in the auditorium.

The ASTOR FILM LOUNGE team is committed to providing you with an enjoyable and relaxed cinema experience despite the restrictions. We hope that there will be concepts as soon as possible that will allow the other cinemas to reopen.

You can find the current program and more info at: https://frankfurt.premiumkino.de/