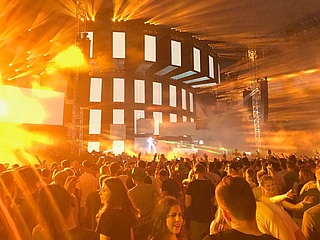 The fifth edition of the BigCityBeats WORLD CLUB DOME was an enormous success last weekend. Even before the three-day party began, the organisers were able to announce the good news that the anniversary edition of the WCD was completely sold out. More than 140,000 visitors from all over the world came to the area around the Commerzbank Arena to party, dance and enjoy the lush beats of the stars present. Even if you had the impression that Peter is not a fan of electronic music, as it rained like hell and sent some thunderclouds over the arena, this did not dampen the good mood. On 700,000sqm and on 20 floors, people partied as hard as they could.

In the arena, Robin Schulz, Steve Aoki, Demitri Vegas & Like Mike brought the crowd to the boil. A special highlight was the performance of Deichkind, who even brought their own stage decoration. The effort was worth it, as the show offered fans not only good music, but also tremendous showmanship. For the female fans, Steve Aoki's set was a special moment, as he took some ladies from the audience on stage, where they then stood in front of thousands of euphorically cheering fans. A real goosebump moment. But not only in the arena itself, where on Friday especially the opening ceremony held some spectacular moments, the mood was quickly at its peak.

Also at the other stages people celebrated in a boisterous mood. Special highlights were the Skyline Stage, where there was a lot going on, or the WCD Pool Sessions, which took place for the second time this year in the adjacent stadium pool. If the water didn't come from above, it was the perfect opportunity to cool down in the sultry temperatures without having to miss out on the party. Those who liked it a bit more chill could retreat to the new Club Forest. In the darkened tent, surrounded by tall trees, there was a really special atmosphere, which was enhanced by the fact that it even smelled a little of forest floor.

Following the great success of the first World Club Cruise in April, when the "Mein Schiff 2" was transformed into the largest club at sea, and the Frankfurt World Club Domes, there will be a follow-up in 2017. However, not in Frankfurt, but for the first time in Asia, where there will be a very special edition of the club music event in September. This upcoming highlight has also already been presented in Frankfurt.

It was once again great to see in its fifth year how happily people from the most diverse nations can celebrate together. A really mega party that was put together here with enormous man power. Respect for it! We are already looking forward to 2018!

<link https: www.youtube.com _blank>You can find a video with impressions of day 1 HERE