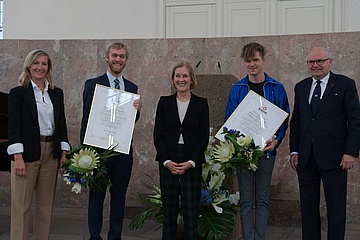 The renowned Binding Culture Prize was awarded again this year. After the festive award ceremony could not take place last year, not only this year's prize winner, the non-profit association ID_Frankfurt (Independent Dance and Performance), but also last year's presite winner, the Junge Deutsche Philharmonie, were honoured last weekend in the Paulskirche. The prize, worth 50,000 euros annually, was presented by Bergit Gräfin Douglas, chairwoman of the board of the Binding Kulturstiftung.

With ID_Frankfurt, the Board of Trustees of the Binding Cultural Foundation deliberately chose an organization from the field of the performing arts, which have been affected to a particularly high degree by the pandemic, as laudator Peter Michalzik emphasized at the ceremony in the Paulskirche on October 30. The non-profit association is considered open, works collaboratively and is committed as an association of freelance artists, theorists and mediators in choreography and performance who are active in Frankfurt am Main and the surrounding area. The focus is on the commitment to improve the working situation and self-organization.

The head of the department for culture and science, Dr. Ina Hartwig, sent her appreciation for the continuous work of the association: "I am very pleased that ID_Frankfurt receives the Binding Culture Award and congratulate on this more than deserved award! Within just a few years, the association has developed into the central networking and anchor point for Frankfurt's entire independent dance and performance scene. The fact that our city is increasingly becoming one of the most important centers nationwide, especially for the more experimental forms of performing arts, is not least also a credit to the many good and fruitful approaches and initiatives of ID_Frankfurt."

"ID_Frankfurt has developed into an important impulse-giving organization in Frankfurt's cultural scene and is committed to balanced and well-resourced dance and theater funding as well as appropriate production and presentation conditions in Frankfurt," explains Jacob Bussmann, board member of ID_Frankfurt.

"Currently, the association is planning and realizing the project ID_Tanzhaus Frankfurt Rhein-Main the fourth edition of the Implant Festival, which aims to create greater visibility for dance creators. Against the background of these and other projects, we are very pleased about the great recognition that the commitment of the association receives through the award of the Binding Culture Prize."

During the double award ceremony, the 2020 Binding Culture Award was also presented to last year's winner, the Junge Deutsche Philharmonie. The members of this unique orchestra are among the best students of German-speaking music colleges, democratically manage their orchestra themselves and thus establish a progressive orchestral culture, according to laudator Dr. Andreas Bomba.

With this year's double award to the prize winners of 2020 and 2021, the tradition-rich Binding brewery once again underlines its close ties to its home region.