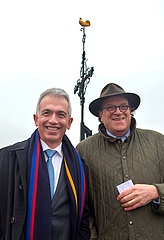 (kus) Since Friday, November 17, the Brickegickel is back on the Old Bridge. "I am very pleased that Frankfurt now has one of its traditional landmarks back," said Lord Mayor Peter Feldmann in his celebratory speech. In a festive ceremony, he unveiled the statue together with Christoph Mäckler, architect and chairman of the New Bridge Building Association Frankfurt. The current cockerel is the sixth Brickegickel in Frankfurt's history. While most of them disappeared during floods or wars, the fifth one was stolen in the nineties.

The Brückenbauverein financed the production of the statue with the help of donations. The Lord Mayor thanked the association for the generous gift and praised its commitment. "The fact that a piece of Frankfurt's identity is returning to its place today with the Brickegickel is thanks to the great willingness of the people of Frankfurt to donate money and support this historic project."

The Brickegickel, along with the crucifix, had been in storage in the Office's Mitte construction district since 2013. There a revision of the figure took place. Last year, Charlemagne already returned to the Old Bridge. Also for this monument, the bridge building association had collected donations